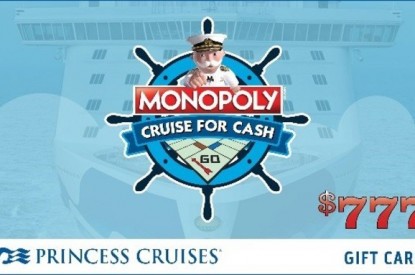 Princess Cruises has announced it will be offering the cruise line’s largest hosted slot tournament with the highest cash and prizes ever offered through a partnership with Scientific Games Corporation.

The Monopoly Cruise for Cash promotion will be available on hundreds of cruises throughout 2018, culminating in a $200,000 slot tournament onboard Regal Princess departing 9 December 2018.

“Through our partnership with Scientific Games, we’re able to showcase some of the latest slot technology in the industry,” said Anil Mansukhani, vice president onboard revenue and business development for Princess Cruises. “We’re continuously updating our casino offerings and investing in popular slot games, like MONOPOLY Millionaire, Lock it Link Night Life, 88 Fortunes, Zeus Unleashed, and Fu Dao Le for our guests.”

“Our goal at Hasbro is to provide families and friends of all ages with unique gaming experiences, and the Monopoly Cruise for Cash promotion aboard the Princess Cruise line will allow us to do just that,” said Mark Blecher, SVP of Digital Gaming and Corporate Development at Hasbro. “We’re thrilled to work alongside Scientific Games to bring this new offering to life, and are excited to watch the Monopoly brand further engage its fan base both on land and at sea.”

The final tournament onboard Regal Princess, which has the largest slot floor throughout the fleet, departs Ft. Lauderdale on 9 December for a seven-day, Eastern Caribbean cruise. Stops include Princess Cays, St. Maarten and St. Thomas. In addition to the Monopoly Cruise for Cash tournament, guests have other chances to ‘win big,’ including the popular Paradise Lotto and MONOPOLY scratch tickets.

In support of the “Come Back New Promise” ship renovation campaign which is designed to enhance the line’s onboard guest experience, Princess Cruises has invested more than $25m in capital and operating improvements in its casinos over the past several years to bring unique events and promotions to both experienced and novice casino players alike.

“We’re proud that Princess has continued to modernise our casinos across the fleet by making significant investments in the form of new slot and table products, furnishings, and exciting new mobile gaming technology such as Play Ocean. Our casino players have told us that they really enjoy the great environment and lively entertainment that our casinos offer. In fact, USA Today has recognised Princess for being one of the ‘Best Cruise Lines for Gamblers,'” said Mansukhani.