Revenues from Atlantic City’s nine casinos increased by nearly 15 per cent in January compared to a year earlier giving ‘cause for even more optimism as the spring season approaches.’

Sports betting led the way generating  more than $1.348bn, the highest monthly total ever for the state, surpassing the $1.3bn set last October. Online gaming also set another monthly record generating $137.8m which was 33 per cent better than January 2021, and 157 per cent higher than January 2020.

“Sportsbooks have dealt with neighbors legalizing mobile sports betting before and continued to thrive, and it will take a few months before we know for certain the true impact of New York,” said David Danzis, an analyst for PlayNJ.com. “But January’s results are certainly encouraging, showing that New Jersey’s gaming industry can weather New York’s expansion.”

New Jersey’s online and retail sportsbooks handled nearly $1.35bn in wagers in January, up 10 per cent from $1.2bn in December, according to official reporting released Wednesday. Betting volume was up 40.7 per cent year over year, from the $958.7m generated in January 2021. More surprising, it topped the previous state record of $1.3bn in betting reached in October — which was a US high until New York debuted.

With five weekends on the calendar, January’s handle was bolstered by an extra week of regular season NFL games, expanded playoffs, and college football’s national championship game. That led to $340.3m in football betting, but that was down from $398.8m in December. Basketball, though, generated a whopping $553.7m in wagers.

“With the expanded NFL schedule and a favorable calendar, most states will set a sports betting record in January. But only New Jersey saw their most important feeder market turn into competition,” said Eric Ramsey, an analyst for the PlayUSA.com Network, which includes PlayNJ.com. “Ultimately, having such a busy sports calendar in January did seem to help soften the impact of New York’s launch.”

Online sportsbooks accounted for $1.2bn in wagering, or 89.7 per cent of the state’s handle in January. FanDuel/PointsBet/SuperBook topped the online market with $35.5m in gross revenue, up from $27.6m in December. That topped DraftKings/Fox Bet/Resorts, which was second with $10.2m in revenue.

Retail sportsbooks drew $139.2 million in wagers. Meadowlands/FanDuel topped the retail market with $2.9 million in revenue, well ahead of No. 2 Resort AC’s $272,773 in revenue.

“No retail operator in New Jersey will be impacted more by New York’s sports betting expansion more than FanDuel’s Meadowlands sportsbook,” Danzis said. “FanDuel has dominated both the online and retail markets since the beginning, in part, because of its close proximity to New York City. For the first time since New Jersey launched sports betting, FanDuel’s market supremacy in the state is threatened.”

New Jersey’s online casinos continued to steam ahead, setting a fresh record with $137.8m in online casino and poker revenue in January. Revenue grew 32.8 per cent from $103.7m in January 2021, and broke the previous record of $133.2m set in December.

Revenue from online casinos and poker rooms rose to a record $4.4m per day over the 31 days of January from $4.3m in revenue per day in December, ultimately yielding $24.1m in state and local taxes.

“The momentum for online casinos will remain a stalwart for New Jersey’s gaming industry no matter how much sports betting expands in New York,” Ramsey said. “Revenue from online casinos has never been more important for the state’s tax collection.” 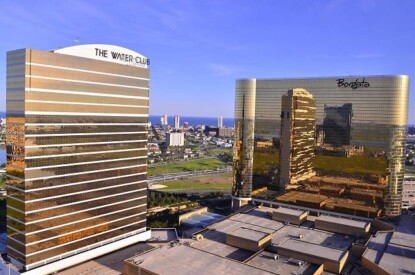