US – Revere files suit over award of Wynn Everett 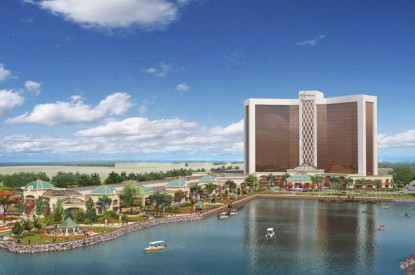 Having lost out in the race for a Greater Boston casino licence to Everett and Wynn Resorts, the City of Revere has now filed a suit against the state gambling commission, claiming that the commission ‘acted arbitrarily and capriciously’ and ‘gave Wynn unequal (and better) treatment than other gaming applicants.’

It also claims that commissioners held secret meetings, in violation of the Open Meeting Law. The City of Revere wanted a Mohegan Sun proposal at the Suffolk Downs racetrack to win out. Management of Suffolk Downs have since informed that the property will shut as a result of the Wynn decision with 145 people losing their jobs.

The aim of the lawsuit filed by Revere and IBEW Local 103 is to overturn the commission’s decision to award the casino license to Wynn.

Revere Mayor Dan Rizzo said: “There are a number of troubling and alarming failures by the Gaming Commission that raise serious questions about the entire process of awarding the Region A license. From inequity in the process, to a failure to require adequate community mitigation, to ignoring potential criminal activity associated with the Everett land, the commission has in almost every regard failed to live up to its obligations under the Gaming Act.”

John Dumas, Business Manager of IBEW Local 103, said: “We represent 145 decent, hardworking people who are facing uncertainty and severe hardship as a result of a flawed process and flawed decision by the Gaming Commission. These people deserve every consideration that we can provide them under the law and we’re going to keep working on their behalf.”

Suffolk Downs Chief Operating Officer Chip Tuttle said: “The complaint filed by the City of Revere and IBEW 103 is indicative of a pattern by the Gaming Commission of lowering its standards, subverting the intent of the gaming law and contorting the process for the benefit of the Wynn Everett applicant. The people who work here are facing significant hardship as a result of this.”

Gambling commission spokesman Hank Shafran responded: “We have seen that intense disappointment express itself in a number of ways, including legal action and even false accusations of bias against the commission. This latest effort is yet another manifestation of disappointment from invested parties after a lengthy evaluation and public deliberation process that was based solely on the merits of competing proposals. We are confident that this complex licensing process has been executed in a manner that is comprehensive, thoughtful and fair, albeit unsatisfactory and disappointing to those who had hoped for a different outcome.”

Wynn’s US$1.6bn casino will be built on the Mystic River waterfront having won out by a 3-1 vote.
However, the 49-page lawsuit alleges that the commission ‘did not give proper weight’ in its decisions to rule against some of Mohegan Sun’s strong points, such as its greater number of successfully negotiated compensation agreements with surrounding communities, and the fact that Suffolk Downs’ ownership had committed to keeping open the racetrack if Mohegan Sun won the license. “The commission knew that granting the Wynn application would likely result in the closing of Suffolk Downs and the loss of significant racing jobs,” the suit states. “Yet the commission did not weigh this factor against Wynn.”

“The failure of Wynn to reach a deal with Boston, and the failure of the commission to give adequate consideration to that failure, violates statutory mandates,” the lawsuit continues.

Boston Mayor Martin Walsh added through his press secretary: “The mayor has clearly expressed his concerns around the process, most recently outlining them in a letter and lengthy chronology.”