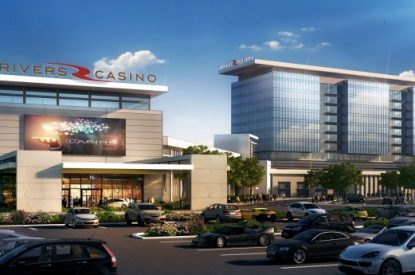 Chicago-based Rush Street Gaming will develop and operate the latest addition to its growing portfolio of gaming and entertainment venues—Rivers Casino Portsmouth.

“This is a great day for Portsmouth,” said Portsmouth Mayor John Rowe. “The Portsmouth voters have said yes to a new economic opportunity – an opportunity that will not only create great new jobs, but also generate more than $16 million in new annual tax revenues for our community. With Rush Street Gaming, Portsmouth has secured an excellent developer and operator of world-class destination casinos, with a track record of keeping promises, community support, and job creation. We’ve chosen our partner very well.”

Rivers Casino Portsmouth’s estimated annual payroll will be $62 million with a Portsmouth First commitment to build a diverse workforce and to hire locally. Without exception, all Rush Street casinos have been voted a “Top Workplace” by their Team Members.

In July 2020, The Virginia Lottery Board pre-certified Rush Street Gaming to operate a casino in Virginia. With the referendum now approved by residents, application for licensing is the next step. Rush Street anticipates opening within two years of receiving a gaming license from the Commonwealth of Virginia.

“We thank the residents of Portsmouth, the City of Portsmouth, and the Portsmouth Economic Development team for their support,” said Neil Bluhm, chairman of Rush Street Gaming. “We’re eager to get construction underway, so this strong economic engine for the Commonwealth and the local community can start producing benefits.”

Rush Street Gaming is one of the fastest-growing gaming and entertainment companies in America. Through its affiliates, Rush Street owns and operates market-leading casinos in Des Plaines, Illinois (Chicago area); Pittsburgh and Philadelphia, Pennsylvania; and Schenectady, New York. Rush Street and its affiliates also developed the Fallsview Casino & Resort in Niagara Falls, Ontario, in close partnership with the Province; and Riverwalk Casino & Resort in Vicksburg, Mississippi, which was acquired by Churchill Downs in 2012.

Rivers Casino and Rush Street Gaming have a long and proud record of diversity and inclusion throughout all its business operations nationwide. Rivers Casino Portsmouth will utilise minority, women and veteran-owned small businesses in every phase of its construction and operation.

Rivers Casino Portsmouth will solicit local minority participation for 5% of the equity contribution or $5 million, whichever is greater, from minority-owned businesses or private investors who are minorities and, as required by securities laws, are accredited investors.

To avoid conflicts of interest, public-sector employees, elected officials at any/all levels of government, their spouses, dependents, and immediate family members are ineligible to participate as investors or owners.