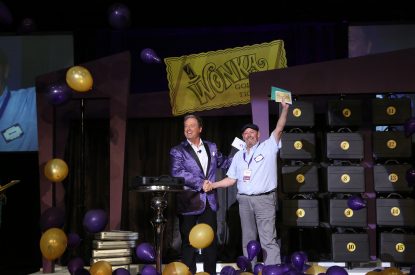 Scientific Games’ record-breaking Willy Wonka Golden Ticket game has returned, this time featuring the Everlasting Millions Second Chance Promotion where players have a chance to win an everlasting prize of $1m per year for life.

The first Willy Wonka Golden Ticket broke all records, amassing double the sales of any previous linked instant lottery game in the US.

“Willy Wonka Golden Ticket is inspired by one of the most beloved films of all time, and in the lottery industry it is especially known for the record-breaking linked instant game that lit up US lottery retail sales in 2017 to 18 with over $1bn in lottery tickets printed over the course of our first offering,” said Kyle Rogers, VP North American Instant Products for Scientific Games.

The all-new Willy Wonka Golden Ticket offers players more fun and more ways to win, with the Colorado Lottery first to launch the $10 game in September. Additional US lotteries are scheduling to launch throughout the first half of 2021.

“We were pleased with how well the first game performed, indexing at 155 over the first 15 weeks, and we are thrilled to be the first lottery to kick off the newest Willy Wonka Golden Ticket game,” said Tom Seaver, Director of the Colorado Lottery. “Our players like fun, excitement and value. The Willy Wonka brand delivers the fun and excitement, while the Everlasting Million Second Chance opportunity delivers the added value in the form of a chance to win a lifetime prize of $1m.”

The Everlasting Million Second Chance opportunity features a four-day/three-night trip for winners and a guest and includes round trip airfare, hotel accommodations, ground transportation, spending money and the opportunity to participate in the Everlasting Million Challenge. The event will be held Summer 2022 in Las Vegas with three rounds of games each themed to the brand: Golden Egg, Everlasting Gobstopper and the Golden Ticket. Every trip winner will win a cash prize from $1,000 up to the chance to win the everlasting million.

“Our game design and marketing teams knocked it out of the chocolate factory once again. Like the Everlasting Gobbstopper from the movie, the everlasting million-dollar prize never gets smaller and never disappears,” said Rogers. “The new Willy Wonka Golden Ticket game has all the elements to be even better than the first.”

The first Willy Wonka Golden Ticket broke all records, amassing double the sales of any previous linked instant game in the US. With most lotteries launching the game at the $10 price point, sales of the Wonka Golden Ticket games exceeded the average $10 game by an impressive 23 per cent—in some states by more than 77 per cent. Eighteen lotteries participated in 23 linked game launches, culminating with more than 200 players traveling to Las Vegas for winner events.

The new Wonka Golden Ticket is Scientific Games’ ninth linked instant game since the company pioneered the concept in 2007, hosting more than 5,000 winners and guests, providing concierge-level service with a focus on security, safety and confidentiality. The company has developed linked game rules, regulations and prize structures over the last 13 years to ensure participating lotteries’ reputations remain intact.

Scientific Games is the world’s largest creator, manager and manufacturer of instant games, and provides games, technology and services to more than 150 lotteries globally.