US – Scioto Downs takes the plaudits after first year 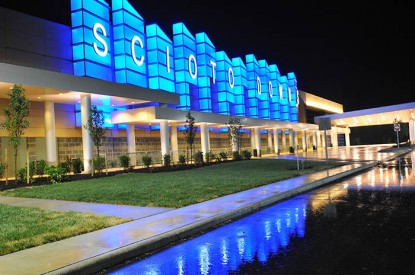 MTR Gaming Group has now paid the second and final US$25m payment for its operating license to the Ohio Lottery Commission for its Scioto Downs Racino.

Scioto Downs, which opened June 1, 2012, was the first race track in the state to receive a license to operate video lottery terminals.  The Las Vegas-style gaming property has been warmly received by both the community and its customers.

Joseph Billhimer , MTR Gaming’s Acting President and Chief Operating Officer, said: “Scioto Downs has performed above and well beyond what we initially expected. When we look back one year from now we were elated that this magnificent property opened ahead of schedule and well under-budget and now, a year later, we are ecstatic about the performance of the property and all of our team members at Scioto Downs.”

The property’s performance has exceeded the expectations of the Ohio Lottery too.  The Ohio Lottery estimated that the state’s share of revenue from Scioto Downs would be approximately $3m a month. Through April the casino has averaged $3.7m a month in payments, or 23 per cent more than expected and has contributed more than $37m to state coffers.

Ohio Lottery Director Dennis Berg said: “Scioto Downs has been a good partner. As the first video lottery terminal operator in the state, we’re grateful for Scioto Downs’ professional and proactive operations.  The track has provided $50m in licensing fees, along with more than $37m in gross operating revenue, which will go toward education in Ohio.”

Troy Buswell, VP and General Manager of Scioto Downs, added: “We are proud that this money goes towards the betterment of the community through education. But we bring more to the table than just tax dollars. Scioto Downs has hired more than 600 employees locally and spends hundreds-of-thousands of dollars a year for services and products provided by local vendors. We are proud to be very active in the community, contribute to numerous charities and causes and we will continue to look for more ways to help this great community grow.”

One of the many beneficiaries of the Racino’s opening is the local hospitality industry.

“We have definitely seen an increase in customers,” said Roger Fangman, General Manager of the Baymont Inn and Suites. “The Scioto Downs Racino has been good for business and they are great partners in the local community.”

Another benefit from the revenue generated by the video lottery terminals (VLTs) at Scioto Downs is the horseman’s purse fund. Since the inception of VLTs, Scioto Downs has contributed more than $10m to the horseman’s fund, greatly increasing the prize amounts for races.

“At this point Scioto Downs is the premier harness racing facility in Ohio,” said Bob Schmitz, Chairman of the Ohio State Racing Commission. “I couldn’t be more pleased with everything that has been accomplished there; from the increased purses to the renovations to the clubhouse; and the increased attendance – Scioto Downs is in great shape and has a very bright future.”

The gaming property, which has attracted more than 2.7 million customers to date, has undergone several improvements in the past year including the addition of a 300-seat buffet, a 100-seat casual dining restaurant, an 82-seat bar/lounge with high-tech sound and lights, and renovations to the grandstand and grounds.