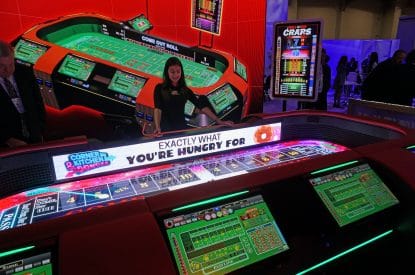 Aruze Gaming America is rolling out its Roll to Win Craps with the Seminole Tribe of Florida at the Hollywood Hard Rock Casino in Florida followed by the Tampa Hard Rock Casino and Immokalee Casino marking the first installs of the game in North America.

Roll to Win Craps Virtual gives players a completely new way to experience a time-honoured game. By maintaining the form factor and feel of live dice craps, it still feels familiar. Roll to Win CrapsTM Virtual uses the same full-sized craps table and player stations, but becomes dealer-less by switching to virtual dice. The player designated as the shooter virtually shoots the dice by interacting with them on their terminal. The dice then shoot out across the table, animating their roll before they land. All players around the table can watch the dice as they travel down the center LED field.

Josh Collins, Vice President of Sales for Aruze Gaming America, said: “We are excited to launch our new fully automated dealer-less version of Roll to Win Craps with the Seminoles. They have been a great partner and launching Roll to Win Craps Virtual with the Seminoles is a great way to kick off what we expect to be another very successful product.“

Juan Martinez, Vice President of Gaming Operations for the Seminole Tribe of Florida said: “As always, we feel Aruze has produced another winning product and we are honored to be the first casino in North America to feature the dealer-less version of this game”