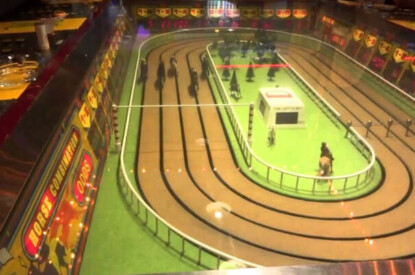 Sigma Derby – the iconic horse racing coin slot game – at the D Las Vegas is saddling up and celebrating 10 years in downtown Las Vegas. It currently remains the only operational Sigma Derby game in the country.

Sigma Derby was brought to the historic downtown district in 2012 when CEO and owner Derek Stevens transformed Fitzgerald’s Hotel & Casino into the D Las Vegas. Stevens felt enticed to bring the game to his new venture, as it was the first slot machine he had ever played in Las Vegas.

“When we bought Fitzgerald’s, we wanted to give the second floor a vintage feel. I always had a

special place in my heart for Sigma Derby and it was perfect for the vibe we were going for,” said Stevens. “The game has a true fan following and we’re proud to have put in the time, effort and mechanics needed to keep those horses trotting for 10 years.”

The original Sigma Derby was created in 1985 by Japanese manufacturer Sigma Game Inc., the beautifully crafted track game includes five mechanical horses where each player must bet one two horses, one that will finish in first place and the other in second place. Each horse is marked one through five with randomly set different odds for each race. Costing 25 cents to enter, the winnings are distributed based on which horses land in first and second place. Legend says if a guest places their first bet on Sigma Derby, then it would bring them luck for the rest of their trip.

As modern gambling machines came onto the scene, the number of Sigma Derby machines declined. Now, the last standing Sigma Derby game sits proudly at the D, where people come from all over the world to play. It also marks one of the last coin-operated casino games in Las Vegas.

To commemorate the anniversary, the D has created limited-edition Sigma Derby t-shirt giveaways which happen every Wednesday from June 29 through August 31. A new t-shirt will be revealed for each giveaway and only will be available each promotional day and limited to one per person, while supplies last. Every hour, at a random time, Club One, the casino’s rewards program, will distribute 10 t-shirts to those actively playing on the Sigma Derby machine from 11 a.m. to 4 p.m.