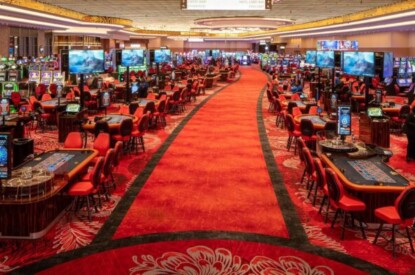 Southland Casino Hotel in West Memphis, Ark., is celebrating the completion of a $320m expansion, including a brand-new 300-room, 20-story hotel with 12 penthouse suites, and a 113,000-square-foot gaming floor that features 2,400 slot machines, 50 live table games and a variety of bars and dining options.

The three-year project completes the transformation of the one-time racetrack, which began with the addition of 750 gaming machines 16 years ago, into a full-fledged Las Vegas-style casino destination with a luxury hotel.

Delaware North, a global leader in the hospitality and entertainment industry, owns and operates Southland as one of its dozen gaming operations in the United States and Australia.

“The Southland expansion is the culmination of a legacy project for Delaware North,” said Delaware North CEO Lou Jacobs. “The completion puts Southland on the map as a true casino destination that will draw patrons from both near and far.”

Southland Casino Hotel, just mere steps away from the new spacious casino floor and new bars and restaurants, looks forward to serving its loyal casino patrons, as well as new guests from surrounding areas such as Memphis, Little Rock, Nashville, northern Alabama and St. Louis. Southland has been recognized by Memphis Tourism as a strong amenity for visitors to the Mid-South and famed Memphis attractions such as Graceland and Beale Street.

The expansion completion celebration culminates with a partnership with Pepsi for a “New Year, New Ride” contest with $250,000 in prizes, including the grand prize of a brand-new Ford F-150. To enter, players must be a member of the Lucky North Club, a reward program offering points to players at Southland Casino Hotel. Southland will choose players each night between 25 December through 31 December, for a chance to win.