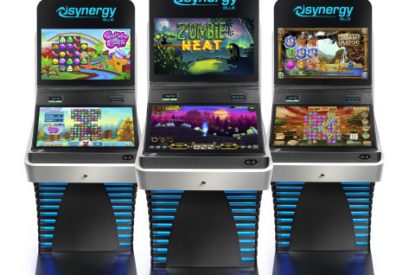 Synergy Blue has unveiled its new 2600 cabinet series. Inspired by the original Atari 2600 console and designed in consultation with Nolan Bushnell himself, founder of Atari and often cited as the Father of the video game industry, the new cabinet line brings arcade-style gaming to casino floors.

The 2600 series is built with today’s players in mind and offers sleek and smooth gameplay, along with multiple arcade-style controllers such as steering wheels, joysticks, buttons and more. The 2600 series provides casino floor operators with more variety of machines and casino games, which keeps players on casino floors longer and appeals to various and expanding casino demographics.

“The Atari 2600 introduced an entire generation to the fun and excitement of video games,” said Georg Washington, CEO of Synergy Blue. “When we began working on cabinet ideas, we kept coming back to the nostalgia that gamers around the world have for the original 2600, but we wanted to update it with today’s players in mind. Synergy Blue’s 2600 cabinet series combines ‘fun you can bet on’ with arcade-style design to provide a fresh look for casino floors and an entertaining experience for players, from joysticks to drivers.”

“The 2600 has been a hallmark of video game console design,” said Nolan Bushnell, founder of Atari. “Bringing the 2600’s arcade-style design to casino floors and sharing the excitement of video games with players not only reminds them of the fun of the past, but elevates the fun of today. Synergy Blue is well poised to bring arcade-style fun to the floor of every casino and the 2600 series is just the start.”