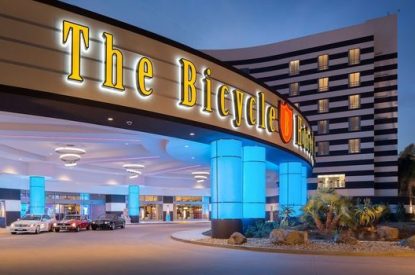 To resolve an investigation into alleged violations of the anti-money laundering provisions of the Bank Secrecy Act (BSA), the partnership that operates The Bicycle Hotel & Casino in Bell Gardens, California, has agreed to pay $500,000 and undergo enhanced review and reporting requirements designed to prevent future violations of federal law.

According to a Non-Prosecution Agreement (NPA) with federal prosecutors, the Bicycle accepted responsibility for failing to properly file reports for a foreign national who conducted millions of dollars in cash transactions at the casino in 2016. The casino failed to file Currency Transaction Reports and Suspicious Activity Reports for Casinos (SARCS) that are required under the BSA, a law intended to thwart money laundering.

Federal prosecutors entered into the NPA in recognition of the Bicycle’s remedial efforts to strengthen its anti-money laundering program, as well as its acceptance of responsibility, cooperation with authorities during this investigation, and agreement to make a $500,000 payment.

Under the BSA, casinos like the Bicycle are required to implement and maintain programs designed to prevent criminals from using the casino to launder the large sums of cash that illegal activity can generate. For example, casinos must record and report to the government the details of transactions involving more than $10,000 in cash by any one gambler in a 24-hour period. The BSA also requires casinos to file reports documenting suspicious activity, such as efforts designed to avoid the filing of accurate currency transaction reports.

As part of the NPA, the Bicycle admitted that a “high roller” Chinese national gambled at the casino approximately 100 times over an eight-month period in 2016, playing high-limit baccarat in a VIP room with huge sums of cash that on some occasions he transported to and from the casino in duffle bags. A Statement of Facts in the NPA also chronicles some of the high roller’s marathon play sessions, such as one occasion where he withdrew $2m from his player account at approximately 2:45 p.m. and played in a VIP room through 1:20 a.m. the following morning.

When conducting cash transactions, the high roller relied on an assistant to conduct over $100m in cash-in or cash-out transactions on his behalf. The Bicycle admitted in the agreement that, from at least January 7, 2016, through July 27, 2016, it improperly filed currency transaction reports in the name of the assistant when it should have referenced the high roller in those reports. The casino also failed to file any SARCs during this period.

Bicycle staff informed senior management in July 2016 of the failure to file CTRs or SARCs in the high roller’s name, according to the Statement of Facts. The Bicycle then took various remedial actions, including amending the CTRs to indicate that the cash transactions were done on the high roller’s behalf, regularly filing SARCs for the high roller based on the suspicious nature of his source of funds, supplementing its compliance department with additional staff and resources, and creating an Anti-Money Laundering Committee comprising members of senior management to meet regularly to discuss BSA compliance issues.

Under the terms of the agreement, the Bicycle agreed to pay the United States $500,000, which represents the revenue the Bicycle made from the high roller. The Bicycle must also implement additional review and reporting requirements to assure BSA compliance, including an audit by a third party and regular reporting to the U.S. Attorney’s Office. The agreement also requires the Bicycle to cooperate with law enforcement in any additional investigations or proceedings arising from the conduct described in the agreement’s statement of facts.

Assistant United States Attorney Alexander B. Schwab of the Major Frauds Section negotiated the resolution of this investigation.