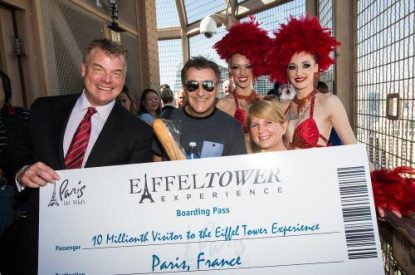 The Eiffel Tower Experience at Paris Las Vegas celebrated its 10 millionth visitor with the launch of 5,000 red, white and blue biodegradable balloons and a special performance by Paris Las Vegas headliners.

Martin Layton, the lucky guest visiting from the United Kingdom, was awarded a seven-day trip for two to Paris, France.

Atop the 460-foot high observation deck, Paris headliners including Taylor Hicks and Jersey Boys caught Layton and his bride-to-be off-guard when they broke from their tourist disguises and performed a celebratory song penned by the musicians themselves with the refrain, “You’re our guest, you’re our guest, you’re our 10 millionth guest!” A boarding pass was then presented by Regional President David Hoenemeyer, Hicks, Jersey Boys and Bally’s Jubilee! showgirls.

“The support of our entertainers, the beautiful balloon launch, and being able to welcome and surprise our 10 millionth visitor with a trip to Paris really makes this milestone special,” said Mr. Hoenemeyer. “We look forward to celebrating this great attraction for years to come.”

The balloon launch, orchestrated from the Gardens at Chateau Nightclub lasted for more than five minutes as they made their way up the tower and across the Strip skyline.

Mr. Layton and his fiancé, Sarah Connell, are first time visitors to Las Vegas and will be married tomorrow at the Chapel of the Flowers. They excitedly confirmed that the trip to Paris will serve as their second honeymoon.

The Eiffel Tower Experience is an exact reproduction of one of Europe’s most famous landmarks, rendered meticulously at half-scale. At 460-feet, an experienced ambassador welcomes guests and points out can’t-miss Las Vegas landmarks and interesting historical facts.