US – Tioga Downs reopens with 33 tables 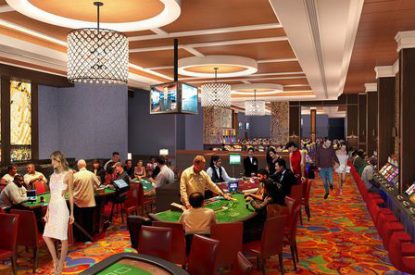 After a gaming license pursuit that has spanned more than three years, Tioga Downs has opened its new casino.

The new gaming floor features 33 long-awaited table games, including Blackjack, Craps and Roulette, as well as popular casino games like Pai Gow Poker, Ultimate Texas Hold ‘Em, Let It Ride, 3-Card and 4-Card Poker and the Big 6 Wheel.
The casino’s Winner’s Circle Lounge has been rebuilt to house the casino’s new Poker Room. With 12 tables, seating up to 10 players at each table, the room can accommodate up to 120 players and plans are already being made to host multiple tournament events in 2017.

New tables aren’t the only new games players will find in the casino. The facility also needed to replace all of its 798 video lottery terminals with new slot machines. When the casino is complete, guests will find 944 games, including recently released titles like Game of Thrones and new 3D models like Plants vs Zombies. Many of the new machines have a sleeker design and more modern profiles than the older VLTs.

“The trend in slot manufacturing the past few years has been to make games that are bigger and more comfortable for players. The dynamic themes and interactive bonuses give the guests a better overall gaming experience,” Tioga Downs President and General Manager Scott Freeman said.

The casino has even installed USB charging stations in many of the machine bases so guests can charge their phones without having to worry about leaving them unattended somewhere or running down their batteries.

The opening of the new gaming area comes just over three years from the passage of New York’s Proposal 1, which authorised the issuing of a limited number of commercial gaming licenses throughout New York State. After an unsuccessful first bid for the Southern Tier license in 2014, Tioga Downs as well as community leaders, led a campaign to re-open the bidding process to allow for the award of one additional license to the true Southern Tier. The request was granted and after a successful second bid process, Tioga Downs was formally granted its full gaming license on Tuesday, August 30. Since that time, construction crews and the entire Tioga Downs team have been feverishly working on first phase additions to the property to get the casino open. As originally promised by the track’s owner, Jeff Gural, Tioga Downs will be the first property awarded a gaming license under Proposal 1 to open its casino doors despite having to go through a second bid process.

“This has been a long journey, but one that I have stated from the beginning is an important one for the people of the Southern Tier. We have created a lot of additional jobs, revenue and opportunity for the region as well as benefitting local businesses and nonprofit organizations,” American Racing and Entertainment Chairman Jeffrey Gural said. “I am so appreciative of our local and state officials, as well as Southern Tier community for the overwhelming support of the project that helped it come to fruition. It would not have been possible without their help.”