US – Topping off completed for Las Vegas’ Lucky Dragon 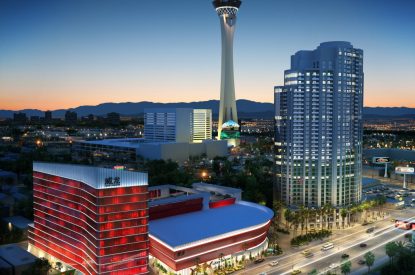 Penta Building Group has completed the hotel structure of Lucky Dragon, a Chinese themed casino being built at the north end of the Las Vegas Strip.

The project, which includes a nine-story hotel tower and a separate casino building, has slipped under the radar alongside much bigger projects such as the Chinese-themed Resorts World Las Vegas, being built close by.

Lucky Dragon is being built on land owned by Andrew Fonfa, the developer of Allure, a $240m high-rise condominium project next to the Lucky Dragon.

Mr. Fonfa is CEO of the Las Vegas Economic Impact Regional Center, a company that has former Las Vegas Sands President William Weidner as its own President.

A spokesperson for the company said: “The Lucky Dragon Hotel & Casino will be Las Vegas’ first casino resort designed from the ground up to create an authentic Asian cultural and gaming experience. There are four pillars to our authenticity. The first is our food. We will have several authentic restaurants and cafes ranging from noodle bars, to high-end dim sum, to tea cafés. Next is our hotel. Lucky Dragon will feature 206 relaxing rooms and a spa that combines China’s rich ancient culture with modern day luxury and amenities. Third is our gaming. The casino game mix will be heavily focused on popular games including Baccarat, Pai Gow, Fan Tan, and Sic Bo and will boast several Feng Shui designed private gaming parlors. Finally, Lucky Dragon’s hospitality will be our shining achievement. Multicultural service and marketing staff will be familiar with the language and customs of our guests, ensuring an authentic and accommodating experience. Our project has been approved as an exemplar project by the USCIS. This has allowed us to receive I-526 approvals for some investors in less than three months, providing investors with a strong assurance they will quickly and reliably gain US resident status.”

The casino is expected to be completed next summer.

It has benefited from the EB-5 program, which is intended to help stimulate the economy and improve the area around the north Strip. Analysts believe it will feed off Resorts World Las Vegas, a similarly-themed project located on the site of the Stardust and the scrapped Echelon project as well as its closeness to Las Vegas’ Chinatown neighbourhood. Another development planned for the area is Alon Las Vegas with Australian operator Crown building on the site of the former New Frontier
SLS Las Vegas opened close by on the site of the Sahara resort whilst MGM Resorts Festival Grounds opened in the spring.