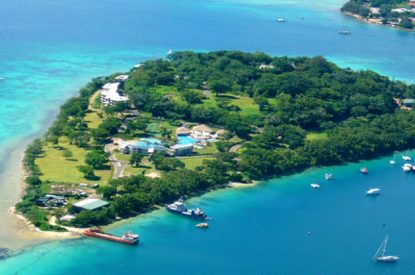 The government in Vanuatu, an Oceanian island nation located in the South Pacific Ocean, has signed a ten year gaming licence into agreement, for a six-star hotel and casino development.

Finance Minister Maki Simelum has approved the licence with the directors of Jewels Casino and Iririki Island Resort, located on an island close to the Port Vila waterfront.

Mr. Simelum said the casino sector could be one of the major sources of revenue for the government and hopes the casino will attract wealthy tourists from around the world to use its facilities.

The archipelago already boasts three casinos. The six level Grand Hotel and Casino, which is the tallest building in Vanuatu, comprising 74 rooms overlooks the spectacular Port Vila harbour whilst the Palms Casino is located in the newly branded Holiday Inn Resort Vanuatu. Club 21 Casino Hotel is also located in Port Vila with a 4,500 sq. ft. casino floor featuring 100 slots and five table games.
The online sector is also coming into play in Vanuatu.

Amax International recently bought a 60 per cent stake in Forenzia Enterprises, a company that owns an online gaming licence for Vanuatu for US$6.2m. It plans to operate a casino with live tables in the capital of Port Vila and stream live dealer action for online players. It also plans for junkets to transport VIP players from China.

Amax International said: “We will negotiate with junkets for sourcing players to play in the online casino in Vanuatu, mainly high rollers from the People’s Republic of China and across Asia, and the junkets will promote the online casino in Macau and across Asia. High rollers will visit the company’s VIP rooms in Port-Vila, Vanuatu, to play baccarat online and the junkets will bear all transportation and accommodation costs of the high rollers.”