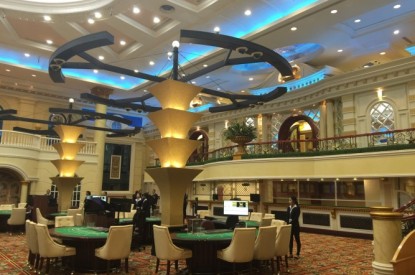 Donaco International’s Chairman Paul Porntat Amatavivadhana has said he is ‘incredibly optimistic about the future path forward for Donaco’ after announcing full year revenue of A$2.44m at Aristo and A$4.5m at Star Vegas.

Donaco’s operations, DNA Star Vegas (Star Vegas) in Cambodia and Aristo International Hotel (Aristo) in Vietnam, were severely impacted by C-19 as the casinos were largely closed throughout FY22.

Star Vegas was shut for the full year and Aristo has been operating on a limited basis since May 2020, resulting in FY22 revenue of A$2.44m (FY21 A$10.32m) and negative EBITDA of A$4.41m (FY21 A$0.07m).
Following the positive news of Star Vegas reopening in June 2022, Donaco received a ∼A$7 million loan facility, to assist in the transition towards the casino’s full operational capacity.

Mr. Amatavivadhana said: “As with the year prior, 2022 was a challenging period for Donaco as the effects of the COVID-19 pandemic on our casinos persisted, which was primarily due to government restrictions in response to the pandemic. Throughout the vast majority of the year, our Star Vegas operation remained temporarily closed and Aristo was open on a limited basis, as a result of these restrictions.

“However, the Donaco Board and Management team proactively implemented initiatives for the Company to be in the best possible position as the impacts of COVID-19 inevitably started to ameliorate in line with the vaccination rollout. These initiatives were underpinned by rigorous measures to preserve cash and protect our balance sheet, including paying off our debt with Mega Bank late last year and the approval of a more manageable USD$5m loan facility from our CEO in the June 2022 quarter. In addition, we maintained a strong focus on cash burn throughout the year,” Mr. Amatavivadhana added.

“Subsequently, when our Star Vegas operation was given the green light by the Government of Cambodia to resume trading on June 18 this year, we were very well placed. Operations at Star Vegas originally recommenced on a limited scale and methodically ramped up throughout the September 2022 quarter, with a view to achieving full operational capability over the coming quarters.

Star Vegas achieved EBITDA of $2.2 million in the September 2022 quarter and underpinned our first EBITDA positive quarter since 1H FY21, with this momentum expected to grow as we head into 2023.
The long-term future for our Aristo operation in Vietnam also looks bright, with the construction of Sapa airport now well underway in Lao Cai, the region where Aristo is located.

Mr. Amatavivadhana explained: “The airport has a capacity of 1.5 million passengers a year and is expected to be open before 2025, and in conjunction with the Lao Cai Ministry of Culture, Sports and Tourism recently recognising Aristo as the only 5-star hotel in the region, it presents a major opportunity for our casino to attract a significant number of new customers. I am incredibly optimistic about the future path forward for Donaco. We have a healthy balance sheet, a strong operational base, and travel flows between the Thailand/Cambodia and Vietnam/China borders are set to continuously improve.”