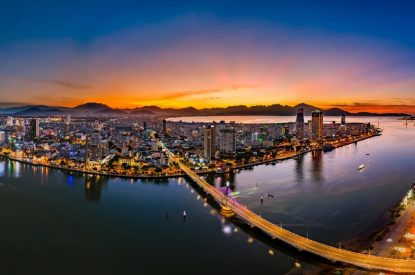 Danang’s Investment Promotion Agency has said that an international finance center to be built in Vietnamese city will boast a trading center, casino, high-end entertainment and luxury apartments.

Huynh Thi Lien Phuong of the Investment Promotion Agency said the building would cover on an area of 84,000 square meters on the beachfront in the Son Tra peninsula.

The project is being backed by the Imex Pan Pacific Group (IPPG), a consortium of companies from the United States including Cantor Fitzgerald, Weidner Resorts/GAM and Steelman Partners. It will aim to attract customers from Laos, Thailand, Myanmar and Vietnam.

Mr. Hạnh Nguyễn said: “With the desire to contribute to the development of Da Nang city in particular and Vietnam in general, to realize the Government’s goal of making Vietnam a developed country by 2045, me and our partners, who are the world’s leading investors in the fields of: Financial Center, Investment and design of resort hotels and casino entertainment complexes, will bring the Regional-level Finance Center Project into Da Nang city in the near future.

Mr. Hanh Nguyen also expressed his respect for the direction of the Government and the Prime Minister, which are the key to paving the way for accelerating and improving the business environment in Vietnam.

He added: “With the determination and facilitation, proactively solving difficulties and problems for investors of the leaders of Da Nang city, we believe that in the near future Da Nang will become a city of finance, tourism, entertainment and shopping on a regional and world-class scale. The Government’s expectation is that by 2045, Vietnam will become a developed country, with the support of the Government in the coming terms, with the assigned mission, I pledge to contribute to bringing Vietnam forward in a multidimensional international.”

The People’s Committee of Da Nang city directed departments and branches of Da Nang city to create favourable conditions for IPPG to participate in the process of selecting project investors following Vietnamese law. A UK company – Sherman, specializing in the construction of global financial center projects, has been selected as the main consultant for the Danang Financial Center project.