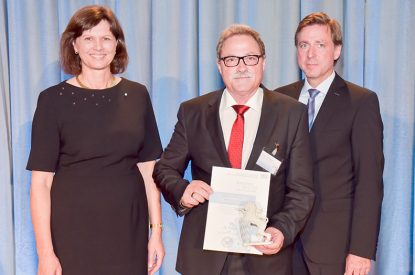 The Regensburg-based video security expert Dallmeier has once again been listed in the Bavaria’s Best 50 for its success.

Over the years, the company Dallmeier has been keeping an eye on both its own success as well as the economic prosperity of its home region.

“We feel strongly linked to the economic area of Eastern Bavaria, not least because of our long-standing cooperation with a network of local suppliers. Our strong partnerships enable us to source most of our supplies and production goods from across the region, contributing to the regional as well as state economy”, says Dieter Dallmeier.

The Bavarian government is well-aware of how important mid tier businesses are for the economy and thus the general living standard across the state. In order to publicly honour the economic contributions of owner-managed companies, the government created the Bavaria’s Best 50 competition. Every year, the 50 most prosperous mid-sized firms in Bavaria are presented with an award for their achievements. The jury specifically looks at the areas of sales growth and workforce expansion.

Having previously received the accolade in 2004 and 2005, Dallmeier has also been presented with the 2016 award.

“The Dallmeier group of companies is looking forward to continue expanding its position and contributing to the general economic growth”, explained Dieter Dallmeier.

Dieter Dallmeier is pictured above with Ilse Aigner and Dr. Thomas Edenhofer,