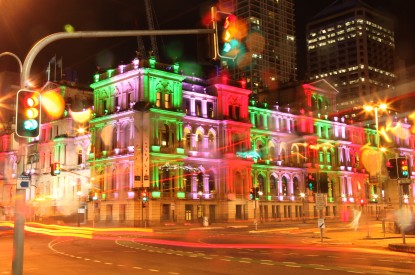 Mr. Seeney said: “It was very much a preliminary meeting about what sort of development was possible; what sort of development would be appropriate for the government precinct. If a decision is taken to vary the operation of casinos in Queensland then the first thing we will do is to build a probity process around the assessment. I can assure the people of Queensland if we are to consider the issues of casino licences, the very first thing that will be done is the development of a probity process that will withstand any scrutiny, that will be about absolute integrity. We’ve certainly looked at what the process is in NSW and I have had some informal discussions with some colleagues of mine in the NSW government about that process to try to understand the sort of things we might have to do if we make a decision.”

The government is evaluating building a casino at the site of the soon-to-be-demolished Executive Building and Public Works Buildings as it looks to revitalise the run-down area of Brisbane.

Echo Entertainment, who operates the Star Casino in Sydney as well as casinos on the Gold Coast and in Townsville, holds an exclusive licence to run a casino in Brisbane, pictured, that doesn’t expire until 2070. Echo CEO John Redmond has already said his company’s preference was to maintain its licence and simply relocate to a bigger, better venue. The current casino and hotel occupy two of Australia’s grandest heritage buildings in the city’s central business district. Echo has operated the Treasury casino at its current site since 1992. A spokesperson for Echo said: “Echo’s vision for relocation of the Brisbane casino and development of an entertainment precinct in the CBD will inject life, energy and atmosphere into the city, while driving tourism and economic benefits to the region. Throughout the world, integrated resorts, or integrated entertainment precincts, are leading the way in the development of large-scale tourism infrastructure and investment.”