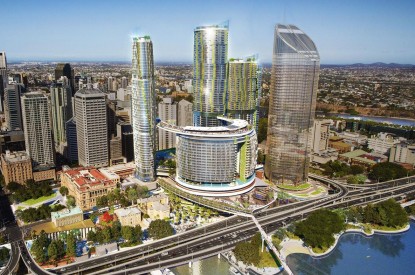 Star Entertainment Group has been given a new casino licence by the Queensland Government for its planned integrated resort at Queens Wharf Brisbane.

The $2bn entertainment precinct will boast more than 1,100 rooms across five hotels, a bridge to Southbank named the Neville Bonner Bridge and the renovation of the heritage Treasury building into a Ritz-Carlton, ready by 2024.

Star Entertainment, who operates Sydney’s Star, Jupiters on the Gold Coast and Treasury Casino in Brisbane, has partnered with Far East Consortium and Chow Tai Fook Enterprises to form Destination Brisbane Consortium who will oversee the project.

The granting of the licence means Destination Brisbane Consortium must pay a fee of $213m to the Queensland Government by October 27 with Star’s share coming in at $77m.

A Star Entertainment spokeswoman revealed that the consortium was still piecing together the detailed design for the project.

The bid won out over a rival scheme proposed by the James Packer-led Crown Casino in partnership with Chinese developer Greenland. Premier Annastacia Palaszczuk chose the consortium in July last year.