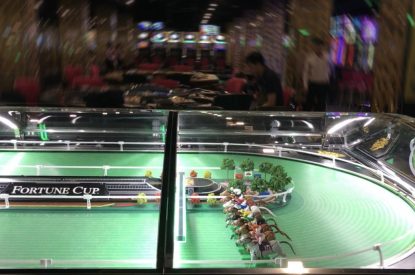 Asia Pioneer Entertainment (APE) has installed the fourth and fifth units of Konami’s Fortune Cup into Macau casinos, including in the new ETG zone of Melco’s Studio City.

The fifth unit is believed to have been installed at Venetian Macao with APE confirming it had gone into ‘a casino of the largest single structure hotel building in Asia on the Cotai Strip.’

The game brings modern technology improvements to a high-demand gaming format enjoyed by generations. The game features 12 betting terminals, a 274 cm wide mechanical track with eight horses that travel freely and independently across the course. The horses’ actions are mirrored by real-time digital animation on connected LCD screens in a sports broadcast format, and players place their bets through touchscreen stations with race stats, horse odds, and comprehensive bet options for win, place, and quinella.

The company has been recognised as one of the inaugural fastest-growing companies in ‘Growth Champions of the Greater Bay Area 2020’ by South China Morning Post (SCMP), an international authoritative news media company. Besides, APE is the only Macau company to obtain this prestigious ranking. The Growth Champions of the Greater Bay Area 2020 was announced in December and recognises companies based in the Greater Bay Area with the highest revenue growth over a period of four years. APE has been ranked as the top 62nd fastest-growing company out of 80 in the GBA with 128 per cent absolute revenue growth within the period.

Herman Ng, Chief Executive Officer and Executive Director of APE said: “It is such an amazing accomplishment that only the companies with the strongest revenue growth can be ranked on the list. We are honoured to be short-listed despite the strong competition among thousands of corporates. Hence, I would like to thank all APE staffs for their contribution and effort to this achievement.”