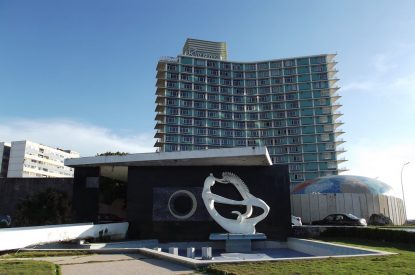 With Cuba and the US looking to resolve claims for the seizing of American-owned properties by the island’s socialist government, the family of the late gangster Meyer Lansky want compensation for a Havana casino hotel taken back after Cuba’s 1959 revolution.

Gary Rapoport, Meyer Lansky’s grandson is seeking compensation from the Cuban government for the Riviera casino which was appropriated during the Cuban Revolution of 1959.

Speaking to Florida’s Sun Sentinel he said: “The hotel was taken from my grandfather forcefully. Cuba owes my family money. We never filed a claim with the government or hired an attorney earlier because we didn’t think the door for negotiating would ever actually open. Now it is open.”

Lansky’s family also want to be receive compensation — either the hotel or its value.

Mr. Rapoport is hoping to make the most of talks which have now opened between the US and Cuba regarding honouring long standing legal claims against the respective governments. Hundreds of billions of dollars of claims will need to be resolved before the embargo against Cuba can be lifted. The US State Department and Cuban officials began negotiating last week in Havana over the property claims. There are nearly 6,000 U.S. claims for properties which were seized by the Castro government.

“Trust me, I’m not looking to move down to Cuba and take over the business,” Mr. Rapoport said. “I believe my family is entitled to something, I realise my grandfather was considered an enemy by the Castros, so that could hurt us. But I also realise that at some point the Castro brothers will be off that island and things may change. I don’t want that property going to anyone else. It belongs to my family.”

Before 1959 Cuba was a major gambling destination and there were close ties between casinos on the island, Dictator Fulgencio Batista and organised crime. Under his rule Havana became known as “the Latin Las Vegas.”

The Havana Riviera hotel opened in 1957 due to the good relationship between Charles “Lucky” Luciano and Batista and was funded mostly by a state-run development bank set up by the dictator. Meyer Lansky who owned the hotel was a long time associate of gangster Luciano. The construction of the hotel cost about US$8m and was at the time one of the finest hotels in the world. Meyer Lansky had been inspired to build it after visiting Riviera Casino on the Las Vegas Strip. He decided to build it in Cuba where it would not come under scrutiny by the America authorities