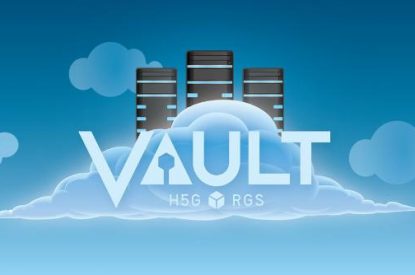 On February 4, at the ICE gaming show in London, High 5 Games will unveil Vault; its revolutionary remote game server that will come packaged with nearly 100 of H5G’s most successful slot games from all mediums.

“With Vault, online casinos will no longer have to wonder about the quality of the games they’re getting,” said Anthony Singer, CEO of High 5 Games. “Vault will only carry H5G’s top hits – the premium games that have been top-performing titles at all of the major casinos around the world.”

High 5 Games’ storied history spans two decades. As a leading land-based game creator for International Game Technology, Bally Technologies, WMS Industries, and Konami Gaming, H5G has created many of the industry’s most successful casino games. Now, High 5 Games is taking that classic content and offering it exclusively on Vault for real-money online play – along with specialized new games that are out-performing even H5G’s lofty standards in both brick-and-mortar casinos and on H5G’s top-rated social casino.

“Our social platform has become a test bed to see which themes and features best resonate with players,” said Med Nadooshan, COO of High 5 Games. “With over 5 billion slot spins played each month on High 5 Casino, we have the unique ability to determine which brands will successfully translate to the online environment.”

H5G games have been strong performers on every platform. Having long been amongst the most popular games in the land-based space, these same games are out-performing all other slots online too. According to IGT CEO Patti Hart during the company’s quarterly earnings call earlier this month, H5G’s Golden Goddess became “the most successful game ever launched at DoubleDown.” That distinction has previously been held by Da Vinci Diamonds – another H5G game which “outperformed any slot [DoubleDown] had by 5-6x,” according to DoubleDown executives.

High 5 Games’ success on its own social platform has also been well documented. The highest rated social casino on Facebook, High 5 Casino features more casino games than any other application on the social network. The company has made history for its decision to premiere top casino brands like Shadow Diamond, Ocean’s Glory, and Miss Universe Crowning Moment on High 5 Casino™ before releasing them to land-based casinos.

“Just as we delivered an enthusiastic fan base to our land-based partners, we look forward to sharing our successes with our new online partners,” said Mr. Singer. “We hope to make Vault a critical component of any premiere online casino destination.”

Vault will launch in New Jersey during 1Q14, initially as part of Caesars Interactive Entertainment’s offerings in the state before being expanded to additional NJ casinos. High 5 Games will roll out Vault in Europe later this year.