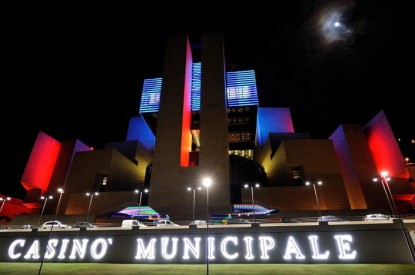 With Casino Campione d’Italia, the spectacular casino in the Italian enclave on Lake Lugano, now teetering on the edge of bankruptcy, its owners are looking at two very different methods of turning its fortunes around.

After years of positive financial results, the municipal casino posted a deficit of CHF8m for the first time in 2012. Its losses since then have increased to more than CHF39m. The business has become overwhelmed by its spiralling debts with the main problem being money owed to the bank Banca Popolare di Sondrio.

The company that manages the casino is 100 per cent owned by the Municipality of Campione, but for months it has failed to pay any contributions meaning it now owes the municipality €25m.
Local Mayor Roberto Salmoiraghi said the collapse of the casino had the potential to plunge the whole municipality into financial chaos. He has announced a drastic reduction in expenses in a last ditch attempt to save the property. The casino will cut its wage bill by 20 per cent as well as reducing its commitment to pensions. The emergency plan announced by Salmoiraghi should save CHF 5.8m. He said it was now time for ‘blood, sweat and tears.’

“This is about saving the casino,” said Mayor Roberto Salmoiraghi. “If the casino fails, the municipality will lose jobs for 500 employees and also a further 100 people employed by the municipality. If the casino fails to transfer the resources it owes to the City, it could be shut down. But if this happens, it will no longer pay anything and so that would be the end of everything. I hope to be able to apply the salary cuts to municipal employees with the agreement of the unions. However if this is not the case, I cannot do anything else but start the mobility procedure. If I am prevented from doing so, I will resign.”

With the casino unable to pay wages to some of its community employees, one such employee decided to take legal action. The Como Public Prosecutor’s Office has subsequently called for an insolvency plan to be put into place. The Prosecutor’s Office has been investigating the accounts of the gaming company for months amid accusations of financial misconduct. A hearing on this is scheduled for the courts in Como on March 12.

One onlooker at the hearing said: “We are arguably the only casino in the world threatening bankruptcy with a gross gaming profit of CHF92m.”

Whilst the cost cutting exercise is both imminent and inevitable, the casino’s owners are hoping to stay afloat long enough to open the door to some creative investment in order to reignite its gaming revenues. As part of a blueprint to attract Chinese VIP gamblers to its gaming floor, it has already invested €5m on buying Villa Mimosa, a 20th century historic building located on the shores of Lake Ceresio, adjacent to the casino, with the plan being to build a Chinese-themed annex to the existing casino.

The aim is to build a ‘super-privé’ separate to the casino but connected legally to its licence. To be called Dragon Casino, the plan is for it to be operational by January 1, 2019. The property would offer Chinese games in a Chinese setting with Mandarin speaking dealers. The casino’s owners have been heavily criticised for the investment so far. However, rumours have surfaced that a slot machine manufacturer is keen to fund the development of the new VIP gaming floor in return for a 60 per cent share of the profits. Whilst this third-party investment would circumnavigate the casino’s financial constraints, the mother venue would obviously need to stay in business long enough for not only the annexe to be built but then to benefit from a return on the slot manufacturer’s investment.