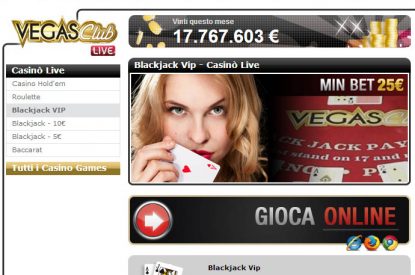 Evolution Gaming, a pioneer in video-streamed Live Dealer gaming, has launched another first for Italy with a new Live Casino Hold’em table for Lottomatica.

The game, which can be played in real time online, is the first Live Casino Hold’em to be certified by AAMS and the first to go live.

Launch night was marked by a guest appearance at the Lottomatica tables by Max Pescatori, one of Italy’s most famous poker players and twice winner of the US WSOP (World Series Of Poker). Pescatori, who trained as a croupier in Las Vegas before becoming a poker professional, dealt at the Live Casino Hold’em table for two evenings, entertaining surprised Italian players

Gionata La Torre, CEO of Evolution Italy, said: “We are very proud to have achieved yet another first in Italy – for Evolution and for Lottomatica. This underlines our shared commitment to delivering the best live gaming experience across multiple channels.”

The Lottomatica Live Casino Hold’em game is available now, live via PC and Mac at www.lottomatica.it. iPad play will be added after the summer and the game will also be incorporated into Lottomatica’s Vegas Club show (DTT channel 59).