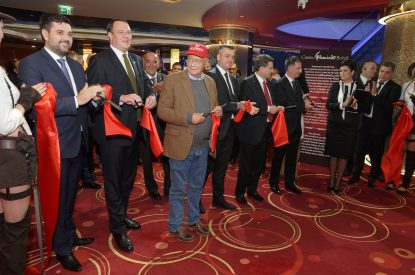 The official opening of the expanded casino premises at the Macedonian Casino FlaminGO was celebrated on October 7, with 3,000 guests as well as Novomatic brand ambassador Niki Lauda as a special VIP guest.

Following the takeover by the Novomatic Group and an investment in extensive refurbishment measures amounting to some €40m, Casino FlaminGO reopened at the beginning of 2014. The latest expansion of the casino premises, which has now concluded, amounted to a further €14m.

The Casino FlaminGO complex to date comprises a hotel with 60 rooms and Spa & Wellness areas, as well as two restaurants, three bars, a café and a nightclub. The casino floor offers 26 live gaming tables with a comprehensive offering, and the number of slots has now been expanded from the original 470 gaming machines to 920 terminals – and will further increase to 1,001 units by the end of the year.
At this point, Casino FlaminGO will become South East Europe’s largest casino, offering jobs for 570 staff and welcoming more than 500,000 guests per year.