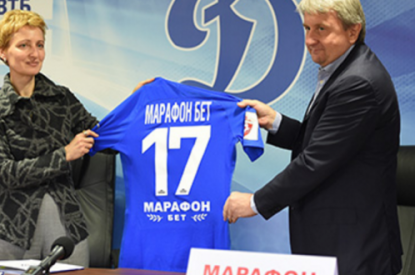 Marathonbet.ru is the 12th online sports betting site to be approved by the national government.
Players will have to resister at one of Marathon’s retail outlets in Russia, currently only in Moscow and St. Petersburg.

Marathonbet’s Ekaterina Zemkova said o the football sponsorship: “Dynamo Moscow is a club with a great history – it is the first Soviet champion, the first Soviet Cup winner. It is a brand recognised all over the world. I am confident that together we will achieve excellent results. We have been partnering with sports clubs for a long time, with a portfolio now including Manchester United, Malaga and Hibernian. We are pleased to have such a prominent club as Dynamo joining these names. We are thankful for the perfectly organised negotiations process.”