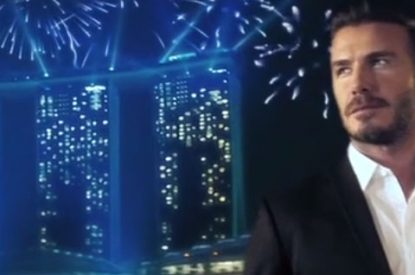 Entitled “Never Settle”, the campaign stars global sports and fashion icon David Beckham in a series of print and television commercials, as well as social media, highlighting Marina Bay Sands’ luxury retail, fine dining, leisure and entertainment experiences. The campaign culminates in a gala event in Tokyo in late 2016 featuring Japanese and global celebrities from the worlds of entertainment, fashion and culture.

Marina Bay Sands Chief Executive Officer George Tanasijevich said: “Japanese travellers have ranked as the No. 1 overseas inbound market to Marina Bay Sands over the last five years. These figures demonstrate that Marina Bay Sands has a unique appeal to Japanese who are drawn to our leisure and entertainment attractions. In response to the strong demand, we have been developing attractions and programming, as well as tailoring our customer service, to better serve our Japanese guests. Our ‘Never Settle’ campaign will highlight many of these attractions featuring our brand ambassador David Beckham.”

The multi-platform Never Settle campaign highlights the luxury retail, fine dining, leisure and entertainment experiences through the eyes of David Beckham. The advertisements from the campaign will appear in local dailies, magazines and online channels across Japan. Celebrating the spirit of advancement, the tagline “Never Settle” brings to life the ongoing pursuit of excellence to experience the best that life has to offer.

“David is known not just as great sportsman, but also as a style icon, philanthropist, businessman and above all, a doting father, husband and family man. Marina Bay Sands has many facets for guests to experience and make their own, and just like David Beckham, Never Settles for anything but the best,‘’ said Marina Bay Sands’ Senior Vice President of Marketing Maunik Thacker. “Through this campaign, we will showcase the multi-faceted Marina Bay Sands experience, beyond its iconic architecture, SkyPark and pool.”

Markus Tan, Regional Director for North Asia at the Singapore Tourism Board said: “As we celebrate the 50th year of the establishment of diplomatic relationship between Singapore and Japan (SJ50), we are excited that Marina Bay Sands is bringing renewed experiences to engage and connect with the Japanese travelers. The “Never Settle” campaign is a tremendous opportunity for us to capture greater mindshare among the Japanese travelers and help generate a desire for the Singapore experience.”