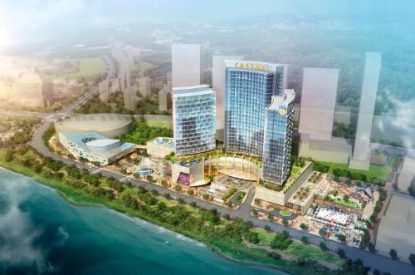 Caesars Entertainment has confirmed that LOCZ Korea Corporation, a joint venture between Caesars, Lippo Group and OUE Limited, has received preliminary approval from the South Korean Ministry of Culture, Sport and Tourism to include foreigner-only casino gaming in its planned integrated resort in Incheon, South Korea.

“We are grateful to the Korean government for their initial approval, paving the way for the opportunity to build and operate our first integrated resort in Korea,” said Gary Loveman, Caesars Entertainment Chairman, CEO and President. “We are excited about the opportunity to expand our network and brands to Asia. Foreign visitation to South Korea has grown significantly, and we look forward to creating a world-class destination to further support Korea’s economic growth and tourism goals.”

Highlights for the planned integrated resort include hotels and resort amenities, live entertainment venues, a standalone convention center and a foreigners-only casino. A preliminary master plan anticipates potential future expansion to accommodate growth in the number of resort visitors.

The consortium hopes to open the Incheon integrated resort in time to welcome visitors arriving in Korea for the 2018 Olympics in Pyeongchang.

South Korea is home to 17 casinos with all bit one of those being foreigner-only casinos, half of which are owned by local operator Paradise and state-owned Grand Korea Leisure.

Paradise said that Chinese players made up around 60 per cent of its player database, accounting for more than 80 per cent of 2013’s revenue.

The market has been growing at an average of 15 per cent each year in recent times with 2012 generating total revenues of 1.25 trillion won.

The Caesars project aims to add more than 890bn won in tourism income from new visitors and will create more than 8,000 jobs during construction from 2014 and 2018.

BNP Paribas Securities Analyst D.S. Kim said: “It’s going to change the landscape of Korean casinos because it’ll be the first integrated resort-style foreigners-only casino. The existing casinos in Korea are like gambling dens which do not offer any non-gaming amenities such as spa, restaurants or entertainment shows. They simply cannot cater for large groups of visitors.”

Thomas Bae, an analyst at Woori Investment & Securities, added: “The approval of the Caesars-Lippo project will be a watershed to gauge the government’s will toward the casino industry. The casino industry has superb growth potential and if the regulatory hurdle is lowered, it would further bolster foreign investors’ appetite in the industry.”

Other operator such as Japan’s Sega Sammy Holdings and Genting Singapore are also looking to enter the market. Genting Singapore is partnering with Chinese property developer Landing International Development in the hope of developing Resorts World Jeju, a US$2.2bn casino resort, but is still waiting for confirmation that it will be given a licence.