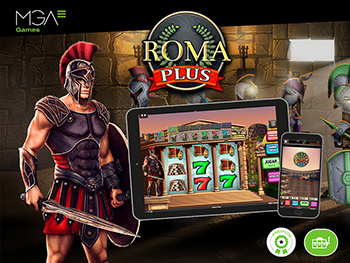 MGA Games presents Roma Plus, the premium version of Roma, one of the company’s most emblematic products. The renewed version of the 3-reel classic – the second online slot game created by MGA Games – includes significant game changes and the latest technology making the game playable on mobile, the users preferred channel.

By bringing cutting-edge technology to Roma Plus, MGA Games consolidates its commitment to continuous improvement, transferring each innovation to its entire catalogue. With Roma, already a top production, now, Roma Plus adds an unbeatable gaming experience.

In addition to being 100 per cent mobile responsive, Roma Plus has an unbeatable download time. Its renewed graphics invite players to jump into the Roman arena and win all the prizes in a hand-to-hand battle with the gladiators.

Another significant novelty in this top title from MGA Games is the change in the maximum bet, in Roma €1, now €15 in Roma Plus. Maximum fun with the Roman gladiators, shields, and the weapons surrounding the amphitheater all help to recreate one of the most exciting chapters in the history of humanity.

The production, set in the epic Roman Empire, presents a lower game with a gigantic papyrus manuscript with moving symbols, bonuses, vertical lines, and wilds. And in the upper game, accessed by accumulating bonuses and credits, players witness gladiators preparing to swing their swords and drive their swift chariots to victory.

The 3-reel slot also includes 4 mini-games, one in the lower game and three in the upper  game, and with certain pay lines, players can enter the armoury, take a detour through the Colosseum, compete in a chariot race and spin the sword roulette.

“Roma Plus” is a 3-reel, 9-line game in Spanish and English, with advance, hold and vertical lines. The minimum bet is €0.20, the maximum €15, and the maximum prize money is €15,000. The slot game is available starting this Monday, January 23rd, for operators in the Spanish market.