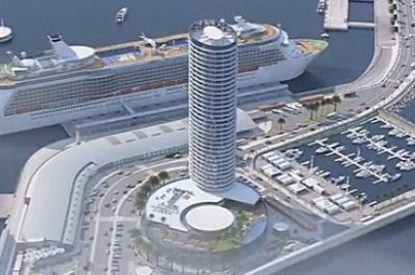 Spokesman for local political party Málaga para la Gente (Malaga for the People), Eduardo Zorrilla, has come out against the building of a skyscraper hotel in Malaga arguing that it would ‘drastically transform the city’s image and would relegate to the background other important buildings.

He also slammed the project for its ‘unsustainability and visual and environmental impact.’

In the motion the party urges the government to undertake “serious and rigorous studies” into both the economic and environmental impact of the new project and has demanded that the Port Authority carry out a “truthful and credible” economic and financial study during which public participation into the matter is guaranteed. The group has also said that it wants assurances that the hotel will only be granted permission after a “transparent administrative process” and after a rigorous investigation into every aspect of the future development so that all legal requirements are fulfilled. A greater level of public involvement is also needed including an “in depth debate” which would involve the consultation of leading experts in hotels and casinos as the new hotel will affect the city’s skyline for decades to come.

This could be the beginning of a larger movement against the proposed building of a hotel and casino in Malaga. The group has already gathered thousands of signatures from the public who have expressed their concern over the negative effects the new hotel could have on the local community.

In a strongly worded statement Mr. Zorrilla said that the local Ports Authority and the mayor of Malaga Francisco de la Torre planned to “perpetrate a horrendous skyscraper that would completely transform the image of our city.” He also accused local lawmakers of planning the new hotel behind “people’s backs” and that for it to be implemented legally it would need the approval of a number of local government bodies first.

In October 2016 it was revealed that the Qatar-based Al Bidda Group, which had been given permission to build a skyscraper hotel in the the Port of Malaga, had included a casino as part of its business plan. According to reports in local press at the time, the casino would help enable the company to make the project more profitable and make a faster return on the €106m which it will invest in the construction of the hotel. The casino will have an estimated cost of €3.6m. The building, will rise to 135 metres, house 352 rooms, provide parking for 485 vehicles, feature a conference centre, luxury shopping centre, swimming pools, a spa and a casino. The project was endorsed by the city council in September. If all goes according to plan the new skyscraper hotel will create around 1,300 jobs during construction and a further 350 when it opens in 2020.