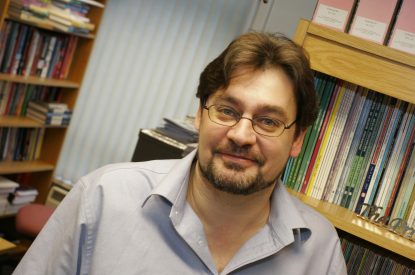 An academic at Nottingham Trent University has become the first ever recipient of a lifetime research award, given by the US National Council on Problem Gambling (NCPG). Dr Mark Griffiths, the university’s Professor of Gambling Studies, will receive his award at the NCPG’s national conference in Seattle on July 20.

The award is given for exceptional long-standing research which assists problem gamblers and their families. The prestigious prize is only bestowed in exceptional circumstances and – although it has been available for many years – has never been awarded before.
Professor Griffiths is internationally known for his work into gambling and gaming addictions and is head of Nottingham Trent University’s International Gaming Research Unit.

This is his 14th career award and his second from the NCPG after winning an award for ‘an outstanding body of research on problem gambling’ in 2009.

“I am absolutely delighted to have won this award,” said Professor Griffiths, who will be the keynote speaker at the NCPG 27th national conference in Seattle and has been invited to give an award lecture at next year’s conference in Florida.

He said: “Although I have won many awards before, this one is right up there because it is a lifetime achievement award given by one of the most respected organisations in the gambling studies field. It’s also great to be recognised by fellow peers that you are making a contribution and helping others in the process.”
Keith Whyte, the executive director of the NCPG, said: “Mark has created an extremely impressive array of research on gaming and problem gambling. I think it is safe to say that there is no one with a more extensive record of publication, conference presentations and public speaking.
“His work has resulted in a much greater understanding of problem gambling among academicians, therapists, policy makers, and the general public.”

Earlier this year Professor Griffiths was named an academician of the Academy of Social Sciences in recognition of the impact he has made in his field.
He also received the American John Rosecrance Research Prize for ‘outstanding scholarly contributions to the field of gambling research’ in 1994 and the Canadian International Excellence Award for ‘outstanding contributions to the prevention of problem gambling and the practice of responsible gambling’, in 2003.

Three years later he won a North American Lifetime Achievement Award from the US Institute for the Study of Gambling and Commercial Gaming in recognition of his ‘dedication, leadership, and pioneering contributions to the field of youth gambling’.