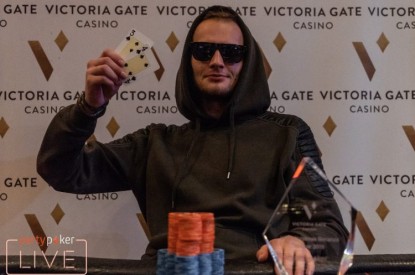 The Victoria Gate Casino Poker Bonanza was by the far the biggest event in the UK this Christmas with more than twice the prize pool of the next largest competition held in London.

The record-breaking event attracted 2,009 entries compared to 830 in 2017 which was a 142 per cent growth for entries and prize pool year-on-year demonstrating the growing popularity of poker tournaments.

Each contestant paid £115 to enter or for the first time they could qualify through PP LIVE Dollars on Partypoker Live. The tournament featured eight starting flights which were held between 22nd and 30th December 2018. Each starting flight saw players sit down with 20,000 chips and play 16 levels of 30-minute poker games, with an additional two partypoker online days 1’s with blind levels of 15-minutes each.

A total of 163 prizes were paid out with the tournament culminating with 208 players qualifying for Day 2 on 30th December. After 10 hours of play 208 became nine and with a short burst of knock-outs there were just six players left who asked for an ICM (Independent Chip Model) payout. Therefore, the remaining £116,000 was split between the six final players which left £6,000, the trophy and of course, bragging rights to play for the final three players.

A tense two-hours of further play resulted in Midlands-based player, Karolis Norinkevicius being crowned the newest Victoria Gate Casino poker champion. He turned his £115 entry into a £26,000 pay cheque. Norwegian player Erik Hanson travelled all the way from Norway to take part and walked away with second prize of £16,630.

Local Leeds’ player, Ezaldin Adams who turned his free entry (after previously winning an earlier in-house promotion) into a cool £28,280 the day before his birthday. He was chip-leader when the initial table deal was done, so as he had the highest amount of chips (13 million) he secured the majority of the prize pool.

Patrick Noakes, managing director of Victoria Gate Casino commented: “Our Christmas Poker Bonanza was the biggest poker event in the UK over the Christmas period and one of the busiest events of the year. It was great to partner with partypoker LIVE which opened up the game to even more players. It topped off an excellent 2018 for us where we’ve welcomed tens of thousands of gamers from around the UK, Ireland and across Europe through our doors.

“Victoria Gate Casino is an all-round entertainment venue which offers a brilliant night out for everyone, whether you’re a gamer, want to watch football or boxing on the largest sports screen in Leeds or just want a delicious meal accompanied with a cocktail.”