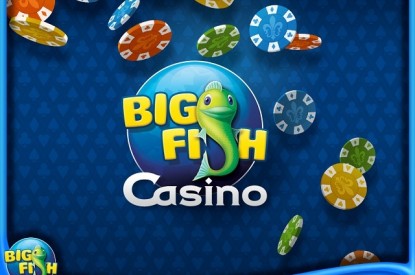 Big Fish, the world’s largest producer of casual games, announced that 2013 was another banner year for the company. 2013 was the 11th consecutive year of solid double-digit growth for Big Fish, with more than US$266m in gross revenue.

The company’s growth was driven largely by its success in mobile free-to-play games, such as “Big Fish Casino”, “Fairway Solitaire” and several other new emerging titles. Over the past two years, Big Fish has emerged as a top mobile games company as measured both by revenue and content breadth with several top-grossing games and almost 400 unique titles on iOS alone.  This success in mobile and the free-to-play business models underscore the company’s continued focus on providing high-quality entertainment to mainstream consumers on the devices they want to play and in the way they want it delivered.

“Big Fish is the world’s largest producer of casual games, and we are one of the few companies with a legacy PC games business that has successfully transitioned to mobile devices and, due to a strong history in data analytics, quickly adapted to the rapidly growing free-to-play business model, all while maintaining robust revenue and profit growth,” said Paul Thelen, Big Fish Founder and CEO.  “In October of 2013, Gartner put out a report that stated ‘Mobile games are the fastest-growing segment of the [worldwide video game] market, with revenue set to nearly double between 2013 and 2015 from $13.2bn to $22bn.’  Since 2008 Big Fish has been at the forefront of that growth and we will continue to be.  We exited 2013 by successfully transitioning our company into a mobile free-to-play games company, exiting the year with a run rate that accounted for more than half of Big Fish’s overall gross revenue.”

In 2013 Big Fish scaled several hit games that ranked No. 1 in their respective genres as measured by gross revenue. Apple named “Big Fish Casino” as a top-ten grossing app for 2013, and the only casino game to appear on Apple’s 2013 top-grossing list for both iPhone and iPad. “Big Fish Casino” (a free-to-play social casino available on iOS, Android, Facebook and PC) has had more than 17 million friend connections made.  This strong social engagement helped grow “Big Fish Casino’s” gross revenue by 250% from 2012 to 2013, and the game’s installs grew by a factor of at least five in all key markets, including the United States.  Big Fish also scored the No. 1 grossing solitaire card game in 2013 with its franchise hit “Fairway Solitaire” that grew more than 100 per cent in 2013.

Big Fish’s focus on a multi-year transition to a free-to-play mobile games company will accelerate in 2014 with the launch of more than 20 exciting and innovative new free-to-play titles.  By comparison, Big Fish released three mobile free-to-play titles in 2012 and five in 2013.

Big Fish’s internal studio and developer partnerships around the world enable Big Fish to provide top-quality, high-performing exclusive free-to-play and premium casual games.  Its consistent annual growth in gross bookings stems from a deeply engaged global audience that relies on Big Fish to bring the best new casual game content to market each year on the devices they want to play.