US – Horseshoe feeling lucky with 4.8m visitors in first year 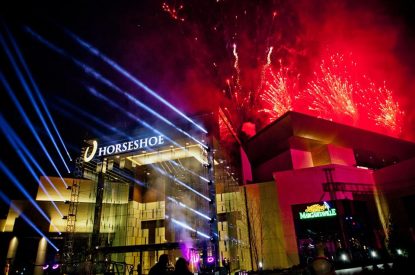 Horseshoe Cincinnati is celebrating a successful first year as Cincinnati’s “hometown casino” with month-long promotions and a continued commitment to re energising the downtown area.

Horseshoe Cincinnati opened on March 4, 2013 with a spectacular fireworks show and more than 5,000 guests who patiently waited in line to be among the first to experience the city’s newest entertainment destination. As Ohio’s fourth and final full-service casino, the US$450m development received a warm welcome by Greater Cincinnati throughout its first year with more than 4.8m guest visits.

“Horseshoe Cincinnati was designed to add to the vibrancy of downtown Cincinnati by being the premier regional and local destination for the best in gaming and entertainment,” said Kevin Kline, general manager of Horseshoe Cincinnati. “We accomplished this and more with our Total Rewards program and unique partnerships with local hotels, restaurants, sports teams and tourist attractions.”

Casino developer Rock Ohio Caesars committed to making a sustaining, positive impact on the community through job creation, stimulating development in the northeast corner of the city and partnering with other area businesses. More than 1,700 casino jobs were created and the property boasts a total annual payroll of $52.8 million. Since opening, Horseshoe has booked 45,000 room nights at partner hotels and $1.9m in meals at local partner restaurants. The property has contributed more than $1m through charitable giving and sponsorships and the casino’s team members racked up 630 volunteer hours assisting community organizations.

“I commend the Horseshoe for bringing a new industry, new jobs and a major new attraction to downtown Cincinnati,” said Cincinnati

Mayor John Cranley. “The property’s business model, which is designed to share its success with other businesses and organizations, has already been a win-win for this community and those benefits will only intensify in the years to come.”

Cranley lauded Horseshoe for its focus on diversity in construction and operational hiring practices and announced that the city of Cincinnati will soon launch a similar program based on the casino model. In addition, regional tourism network Cincinnati USA will present Horseshoe with the inaugural Horace Sudduth Progressive Business Award at its annual meeting on March 5 for incorporating better diversity into its business model. During construction, the casino project created 2,000 jobs, with 37 percent of contracts awarded to minority-business-enterprise and women-business-enterprise firms. Upon opening, 23 percent of casino operational contracts were sourced from diversity suppliers.

Casino guests have also been big winners, taking home $50m in jackpots during the casino’s inaugural year. For poker players, Horseshoe Cincinnati hosted its first World Series of Poker Circuit event. The winning celebration will continue throughout the month of March with a variety of dining and gaming promotions.

Horseshoe Cincinnati hosted 250 meetings and events and brought 26 live shows to the downtown area in its first year, but the casino expects the coming year to be even more thrilling. The casino’s outdoor entertainment venue, The Shoe, soon will release its full summer concert series line up, which has already announced popular acts such as Ellie Goulding, Alice in Chains and The Doobie Brothers. The Pavilion, the ballroom inside the Horseshoe, will continue to book live entertainment and events throughout the year.