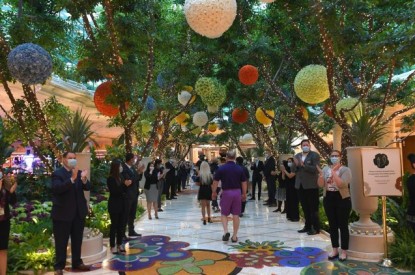 Casinos in Nevada, currently operating at 35 per cent capacity, will now be able to operate at half of their capacity in plans outlined in Emergency Directive 041, signed by Governor Steve Sisolak.

Previously, under the Roadmap To Recovery Plan announced by the Governor in February, large gatherings were only allowed to take place at
up to 20 percent capacity for venues with over 2,500 seats and conventions, conferences and trade shows were going to be capped at 1,000 individuals. Now if an organiser wants to host a large gathering or event, including conferences, conventions and trade shows, with more than 250 people they may now have up to 50 per cent capacity if they complete and submit a Large Gathering COVID-19 Preparedness & Safety Plan Certification Form to the Department of Business and Industry (B&I).

Since being allowed to reopen with limited capacity, 13 casino in Nevada have opted to keep their door shut altogether.

Red Rock’s CEO Frank Fertitta III said: “We want to be in a position that when we reopen any additional properties that we’re going to know that it’s going to be positive and accretive to our overall cash flow.”

Previously, the hotels accommodated weekend stays only, while the gaming floors have been operating 24/7 since the properties reopened in 2020.

“We are excited to welcome even more guests back to two of our popular resorts seven days a week,” said Sean McBurney, Regional President of Las Vegas Operations for Caesars Entertainment. “With Governor Sisolak’s recent announcement, we are encouraged Las Vegas will continue to rebound beyond expectations. Spring break, the big college basketball tournament, pool season and more are around the corner, and we can’t wait to see more friendly faces on the casino floor.”