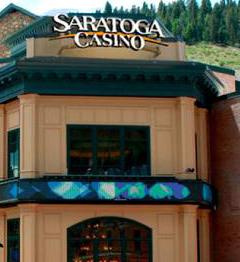 The casino’s opening follows a US$7.5m renovation of the property that has been ongoing since January. The improvements include a new table game area, upgraded games and titles, an escalator which improves access to the remodelled third floor, the addition of Diamond Jim’s Bar and the 120-seat Garden Buffet restaurant.
Dan Gerrity, President of SHRI, said: “As we mark another important milestone for our company today, we are very proud to introduce the essence of world class Saratoga Springs, a celebrated name in tourism, to Black Hawk. The unveiling of Saratoga Casino Black Hawk establishes a little piece of Saratoga in the Rockies.”
Saratoga Casino Black Hawk represents a significant five month transition and US$7.5m renovation from Fitzgeralds Casino Black Hawk. The project includes an escalator to allow guests easy access to the completely new third floor, featuring a lobby bar and the Garden Buffet restaurant. The restaurant will feature fresh local ingredients, a live action grill, hand-mixed ice cream and many other amenities.
The goal of the project was to provide a gaming experience that represents the elegance Saratoga has long been known for. With décor of rich tones, wood panels, equestrian-themed art work and spectacular custom light features, the undertaking was a success.
Jamie Hartman, Executive Vice President and Chief Operating Officer of Saratoga Casino and Raceway, explained: “We’re ready to show Colorado the reasons for Saratoga Casino’s incredible success in the northeast, specifically our unrelenting commitment to service and quality. Created with the same standards and passion for the industry, Saratoga Casino Black Hawk is not just a new name and a newly renovated facility, it’s an opportunity to experience Saratoga without leaving Colorado, while offering the same value and excellence that makes Saratoga so successful.”
Significant renovations have also been completed throughout Saratoga Casino Black Hawk. The table game area has been moved to be more easily accessible to players and the entire area has received new carpet, paint, wall coverings and lighting. Many of the newest and most popular slot titles have been added, including Pawn Stars, Monopoly, Wizard of Oz and more.
General Manager Andrew Gentile added: “In order to accomplish the nature and scope of this project in only five months, you have to know in advance that you have a strong, reliable team. An immense effort has been made to ensure that everything was ready for the grand opening. Through their efforts, this hard working and dedicated team has demonstrated their commitment to the new property and its long term success.”
Saratoga Casino Black Hawk is located in the historic area of Black Hawk, Colorado, just 39 miles from downtown Denver. Saratoga Casino Black Hawk offers nearly 600 of the latest slot machines; electronic table games; 11 live table games including blackjack, roulette and 20x odds on craps; two full-service restaurants including the Garden Buffet and The Café, plus two full-service bars with lounge area.