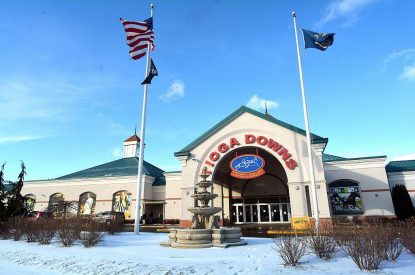 The transformation into a full casino gaming resort would include table games which are currently not allowed at the venue.

Tioga is the fourth project to receive a casino license under the state’s new expanded gambling law, which Governor Cuomo wants to boost upstate New York’s long-term economic decline. The news is a huge plus for those in the Southern Tier who felt they were sidestepped in last year’s casino selection process. Four casino licenses were originally approved for New York’s three state regions: the Albany-Saratoga area, the mid-Hudson Valley and Catskills region, and the Finger Lakes-Southern Tier. The board recommended licenses for projects in the Catskills, Schenectady and the Finger Lakes but withheld the fourth license. Only intervention from Governor Andrew Cumo saw the Southern Tier get its chance to develop a full casino licence.

Tioga must now apply to the Commission for a gaming facility license in Region Five, Zone Two.

Once complete, Tioga Downs will be transformed into a $195m regional entertainment destination. The expansion will also represent a significant investment in the local workforce in the form of 840 new direct and indirect jobs and $145m of spending for the State of New York. Always committed to investing in the community, the expansion will allow Tioga Downs to further assist small businesses and charitable causes. Tioga Downs Racetrack, LLC proposes to further develop the Tioga Downs harness racetrack and current video lottery gaming facility in the Town of Nichols, expanding the facility and converting the gaming facility to a casino facility. Tioga’s facility would include a 32,590-square-foot casino with 1,000 slot machines and 50 gaming tables, 161 hotel rooms, multiple restaurants and lounges, an event center and expansion to include the existing Tioga Country Club.

Tioga Downs credits the outpouring of community, political and public support over the past several months for making this decision possible.

Track owner Jeff Gural said: “Many members of the community were instrumental in demonstrating to the State that awarding a license to Tioga Downs would positively impact our region,” said “I would like to personally thank the selection committee, Governor Cuomo and the many municipalities and community leaders who made this license for Tioga Downs a reality. In addition, we appreciate every single person who wrote a letter, sent an email or spoke in favour of a full gaming license for Tioga Downs at the public hearing. Your showing of support made all the difference in allowing us to move forward and begin transforming Tioga Downs into a full gaming resort.”

The board added: “This Tioga Application is improved considerably from the one that the Tioga Applicant submitted in 2014 in response to the first gaming facility RFA. In contrast to the 2014 unsuccessful application, this Tioga Application commits substantially more equity to the project and decreases debt, which significantly improves the financial stability of the proposal. There is a greater than nine percent increase in proposed new investment, including a larger hotel, an enhanced outdoor concert venue and additional outdoor parking. The increased scope of the project is anticipated to create more construction job opportunities. The Tioga Applicant now commits to completing all phases of the project. The Tioga Applicant has very strong local support, will provide a good environment for its workforce and is of the appropriate scope and quality to fulfil the intent of the Act to bring jobs and economic development to a long-distressed region of the State. The Tioga Applicant has a significant operational track record as a video lottery gaming vendor at the proposed location, which has enabled it to gather important information about the regional gaming market and its potential customers. The gaming facility has the potential to capture gaming revenue in-state that may currently be spent in a neighbouring state.”