US – Xpressbet named Preferred US Betting Site of Royal Ascot 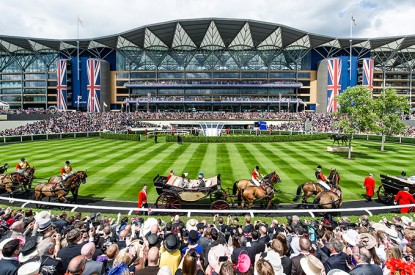 Xpressbet, a subsidiary of The Stronach Group, has been named the ‘Preferred US Betting Site of Royal Ascot.’

Royal Ascot is one of the world’s most prestigious race meets, featuring 19 graded stakes races and £6.58m (US$8.5m) in purses.

Xpressbet is a leading North American betting site and offers legal online wagering to customers in 38 states, as well as Alberta. Xpressbet customers can bet on more than 300 of the world’s top tracks, including Royal Ascot, Santa Anita, Gulfstream Park, Pimlico and Churchill Downs.

Xpressbet is a subsidiary of The Stronach Group, an industry leader in world-class horse racing, entertainment and pari-mutuel wagering technology. The Stronach Group is heavily invested in all facets of horse racing and is at the forefront of a resurgence of the sport in North America. Its commitment to the betterment and growth of the industry made Xpressbet the right choice for Royal Ascot.
“It is with great confidence that Royal Ascot has partnered with The Stronach Group and Xpressbet as our Preferred U.S. Betting Site,” according to Alastair Warwick, Chief Operating Officer at Royal Ascot. “Their continued growth and investment in technology, as well as their dedication to the sport, made our choice very easy. We’re excited to work with them to introduce Royal Ascot to exuberant bettors and fans in the United States.”

Xpressbet’s President, Ron Luniewski, added: “The Stronach Group, Xpressbet and Royal Ascot are all deeply committed to growing horse racing on a global scale. We enjoy a special relationship with the U.K. betting market and its customers. As technology and markets continue to expand, we’re excited to team with Royal Ascot to continue showcasing our sport to bettors around the world.”

Customers betting Royal Ascot with Xpressbet will have the opportunity to participate in a 0 per cent Takeout Promotion on Exactas. Every customer that places winning Exacta bets throughout the meet will receive a bonus equal to the takeout paid on their wager.