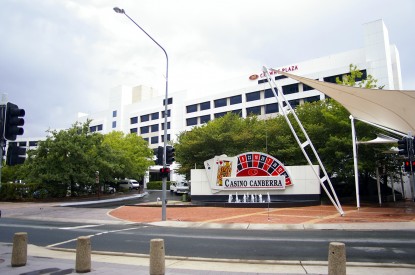 Aquis Entertainment, the new Hong-Kong-based owners of the Canberra Casino in Australia want to redevelop the venue as part of a A$330m blue print that would see slot machines installed at the casino for the first time.

Aquis, who took control of the casino last year, wants to build two hotels, restaurants, bars and high-end retail outlets as part of transformation that would bring 200 full-time jobs to the property.
Aquis Executive Director Justin Fung said: “It’s major redevelopment of the existing casino, as well as the adjoining land between our current casino and the Convention Centre. The redevelopment would include 100 five-star hotel rooms, as well as 12 six-star luxury villa-type accommodation and we’re talking about luxury retail world-class food and beverage. We are talking about revitalising the southern part of Civic and creating that vibrancy that is lacking here.”

Aquis is aming to open the restyled casino in 2018, with the highest structure being 20 storeys high.
“We would market it as an integrated resort and give people an opportunity from Sydney to come down to Canberra. It is that type of project that can be a magnet,” Mr Fung added.

One of the most pivotal parts of the proposal, which would require a change in legislation with the ACT Government, would be the inclusion of slot machines.

As part of the project, Mr Fung said the company was asking the ACT Government to overturn a ban on poker machines at the casino.

“This is an unsolicited bid on our part to the Government and one of the components that we’re looking at is the addition of poker machines. It shouldn’t be looked at in isolation, we’re looking at building an integrated resort, something you might see in Sydney or Melbourne or Perth,” Mr. Fung added. “We don’t have an intention of increasing the total number of machines in the Territory, we want to work with Government to help achieve their goals.”

ACT Clubs chief Jeff House explained that Aquis may have to participate in the Government’s inter-club trading scheme to purchase any slots.

“I would certainly not be supporting any kind of policy change, and certainly not in the context of an unfair playing field where the casino is operating poker machines under a different regime to clubs,” he said. “For this proposal to come to fruition, the licences for the proposal would have to be amended by the Assembly. We still regard it as a line in the sand. The casino would have to successfully negotiate with clubs to buy the machines they are looking to operate. It would have a significant impact on clubs. The experience in other states is that clubs within a certain radius simply close.”

ACT Chief Minister Andrew Barr added: “We welcome their proposal. The initial response from Government is that we certainly welcome the large-scale investor interest.”