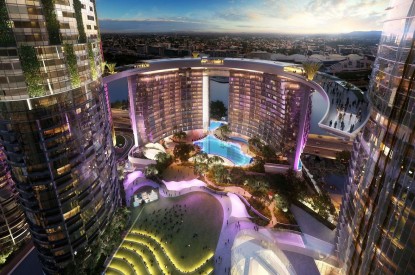 Australia’s Star Entertainment Group will pay the Queensland government $272m in exchange for the right to develop the Queen’s Wharf casino and resort, which will generate over $1bn of state tax over ten years.

Premier Annastacia Palaszczuk and Star Chairman John O’Neill have now signed the final contract for the A$3bn casino resort on the Brisbane waterfront.

When the new integrated resort in Brisbane opens in 2022 it will be known as The Star, Brisbane. Following Star Entertainment’s name change from Echo Entertainment, Jupiters Hotel & Casino will rebrand as The Star, Gold Coast, whilst Treasury Casino & Hotel will become Treasury by The Star.
The first instalment for The Star Brisbane of $272m has now been paid to the Queensland Government.

Premier Annastacia Palaszczuk said: “Another guaranteed $880m will follow from casino taxes over the first 10 years of Destination Brisbane Queensland’s operations from 2022. It’s a large amount of money, it’s a significant sum of money and in total it is more than $1bn. It does mean there is a huge injection of cash that is going directly to pay down debt on our state budget. We would expect to see more than one million tourists coming to south-east Queensland over the coming years. The project will create 2,000 construction jobs and 8,000 operational jobs but we will see overall some 10,000 jobs over the coming year.”

The deal includes a 25-year casino exclusivity period for 60km from the Brisbane CBD for the casino’s 2,500 pokie machines. It has also been granted unlimited gaming tables, including ‘electronic’ gaming tables.

The Star, formerly Echo Entertainment Group, has partnered with Hong Kong based Far East Consortium and Chow Tai Fook in the formation of the Destination Brisbane Consortium.

Mr O’Neill added that the aim was to attract an additional 1.4m international tourists each year to Queensland, bringing an estimated spend of $1.69bn. China’s emerging middle class would be a key demographic for the development.

The first phase of the build will get underway in 2017 with the old state government buildings being demolished. The development will include five new hotels and an integrated resort including a casino, a link across the Brisbane River to South Bank and a new live theatre, with a $1.3m business centre.

The Star’s Managing Director and CEO, Matt Bekier, said: “We are excited to have finalised and signed the development agreements with the Queensland Government to progress our vision to develop Queen’s Wharf Brisbane into a globally recognised Integrated Resort that competes with the best in Macau, Singapore and any other destinations worldwide. The redevelopment of Queen’s Wharf Brisbane has the potential to deliver significant and positive change for the people of Brisbane, the Queensland Government and DBC. Echo, along with its partners within DBC, looks forward to progressing the opportunity to deliver on the vision for Queen’s Wharf.”