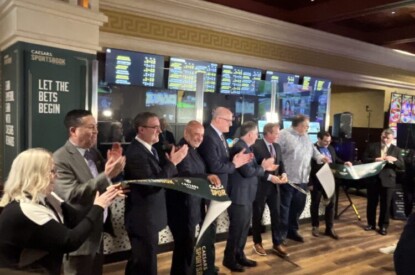 Caesars has opened Ontario’s first full-service sportsbook at Caesars Windsor, an addition which Brian Masse, a local MP, believes allows the property to compete with those in the US.

The sportsbook boasts three betting windows and seven betting kiosks and is located in front of the Legends Sports Bar. There are also betting kiosks outside the Poker Room, at the main floor Skybridge entrance, and inside The House Sports Lounge.  The 1,618-square-foot space also features 22 large-screen HD LED TVs.

The opening ceremony was attended by Kevin Laforet, President of Caesars Windsor; Brian Masse, Windsor-West NDP MP; and Mayor Drew Dilkens with Hockey Hall of Famer Grant Fuhr placing the first bet on a win for the Jacksonville Icemen.

As reported by the Windsor Star, he explained: “It also now gives us a product that competes with the United States, which was sorely lacking. That’s critical because, without those types of amenities, we’re fighting with one arm tied behind our back. So it means protection of jobs and the continuation of services that could even expand in the future depending on how things go. But most importantly we’re no longer at a disadvantage.”

Ontario Mayor Dilkens added: “I cannot think of a better way to build back than add another service, something that had been talked about for years. Single-sports betting allows this community to be competitive with its neighbors in Michigan, with its neighbors in Ohio, because we know the people who come to these facilities have options. We want to make sure the options here in the City of Windsor are second to none.”