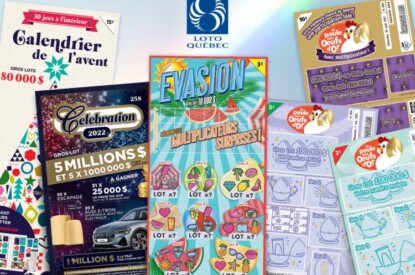 Scientific Games was named the primary instant games partner for Loto-Québec. A new, five-year contract significantly expands the number of instant scratch games the company will design and produce locally for Loto-Québec players. Scientific Games recently invested millions of dollars to advance production technologies and innovation at its Quebec facility.

The company is a trusted supplier to Loto-Québec for more than five decades, celebrating the Lottery’s 50th Anniversary in 2020 and employing generations of workers at its Canadian operations in Québec. Scientific Games is certified globally by the World Lottery Association as a Responsible Gaming Supplier.

“Scientific Games is a longstanding Loto-Québec business partner and employer in Québec. The company’s leaders understand what we are trying to accomplish by creating new, exciting instant game entertainment for our players. They also support us in creating greener scratch games to reduce our environmental footprint,” said Isabelle Jean, Executive Vice-President and Chief Operating Officer of Lotteries at Loto-Québec.

“We have made a significant investment in production technologies at our Montreal facility to innovate new games for the enjoyment of Québec players and support the lottery in its mission,” said John Schulz, President, Americas & Global Instant Products for Scientific Games. “With five instant game production facilities on four continents, our global scale allows us to support Loto-Québec and all of our customers with unparalleled game production capacity and distibution solutions that make Scientific Games the lottery business partner of choice.”

Scientific Games has produced more than 4,500 instant games for Loto-Québec at its Montreal facility over the past 50 years, including the Lottery’s very first game. Games for four Canadian provincial lotteries and the Interprovincial Lottery Corporation, as well as lotteries in the U.S., France, Hungary, Australia and other countries, are also produced at the facility.