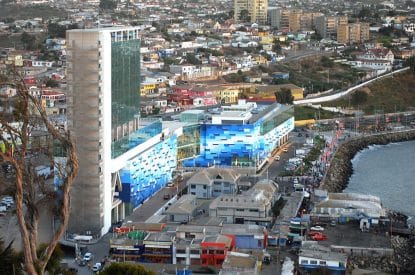 The agreement, which also includes the transfer of the hotel located in the San Antonio casino, amounts to UF159,455 (around US$6.7m).

The deal is waiting approval from the Chilean Gaming Board (SJC) as well as the National Economic Prosecutor’s Office (Chile’s antitrust regulator). The move was announced last week (August 16th).

General Manager of Enjoy, Gerardo Cood said that the development was in line with the Enjoy’s plans in the region: “We are monitoring investment opportunities that generate tangible and relevant synergies, and that is what we saw in these two properties,” Cood said. During 2017, both casinos reached an approximate consolidated income of CLP $12,800 million (around US$19m) from their activities related to gambling. Cood said that both properties had “high potential” within the company’s present business strategy.

Given the amount of the transaction, the executive said that Enjoy was in a good financial position to complete the operation with its own resources, which falls in within the company’s current target financial structure. The transfer of the shares of the contract of sale is subject to compliance with various conditions and depends upon the approval by the Superintendence of Gambling Casinos in accordance with Law Number 19.995 on Casinos, as well as the authorisation by the National Economic Prosecutor’s Office which has the mandate to to advocate and defend competition in the markets.

According to a statement by the Chilean casino and hotel operator in May, Enjoy reported that revenues as of March 31, 2018 reached CLP $ 89,343 million (USD 142m), representing a year on year increase of 3.6 per cent, mainly driven by its operations in Enjoy Punta del Este, Enjoy Coquimbo and Enjoy Santiago.

In August 2017, US based private equity firm Advent International announced that it had signed an agreement with the Chilean operator. Under the terms of the new agreement, Enjoy will remain publicly traded while the founding family of Enjoy the Martinez family will retain a substantial equity ownership position in the company. Bonds issued by Enjoy increased by nearly as much as eight points on the back of the news. The capital increase will strengthen Enjoy’s capital structure, allowing for lower financial expenses, and enhanced investment capacity, including the renewal of Municipal Licenses. Chile’s antitrust regulator approved the move in October. In January it was reported that Advent has purchased 32 per cent of Enjoy for approximately US$120m.

Founded by the Martinez family in 1975, Enjoy is a leading gaming operator in Chile and Uruguay. The company owns and operates 10 casinos and 10 hotels in Chile, Uruguay, Argentina and Colombia, with 6, 824 slot machines, 367 gaming tables, 1,362 hotel rooms and 30 restaurants.