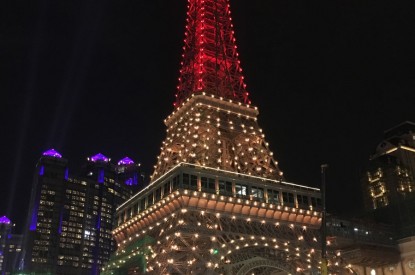 Las Vegas Sands’ Parisian Macau will open with 410 gaming tables, having been granted permission to open with just 100 new tables by Macau’s Secretary of Economy and Finance.

The amount will rise to 150 with 25 extra tables being allowed at the start of 2017 and another 25 a year later. This is exactly the same as what Wynn Palace was recently allowed. Sands China’s President and Chief Operating Officer Wilfred Wong confirmed that Sands would take the total number of tables at the Parisian to 410 by transferring tables from its other properties with 49 catering for VIP gambling. The venue will open with 1,614 slot machines.
Sands’ owner Sheldon Adelson had wanted 250 new tables for the Parisian. Sanford C. Bernstein & Co. analyst Vitaly Umansky said however that the allocation was ‘surprisingly good’ as there were concerns that Sands could get no new tables.

DS Kim, an analyst at JPMorgan Chase & Co. in Hong Kong said: “While the government says the number of new tables is determined on an individual basis by each project’s offerings, we cannot help but think the table grant might be driven more by the timing of opening and the industry’s then operating environment.”