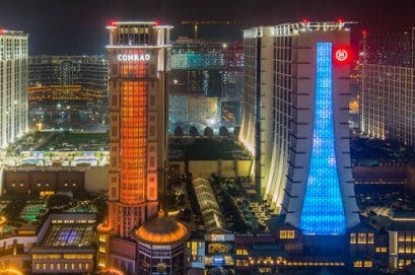 Las Vegas Sands’ COO Rob Goldstein believes Macau’s best days are yet to come, describing the recent opening of the Hong Kong–Zhuhai–Macau Bridge as a ‘game changer’ that ‘opens up the whole of the Rim.’

He was speaking in a quarterly conference call with analysts where a US$727m tax charge in the United States saw Sands report a loss of US$170m in the fourth quarter, with the results propped up by more growth in Macau.

It was a disappointing return after announcing profits of US$1.21bn a year earlier although revenue was up by 2.5 per cent in Q42018 to US$3.48bn.

In 2018, Las Vegas Sands Macau casinos delivered an adjusted property EBITDA of over US$3bn, an 18 per cent increase from 2017. At 17 per cent growth, Sands’ GGR in Macau outpaced the market, which grew by three per cent less.

Mr. Goldstein said: “In Macau, our adjusted EBITDA was $786m. We achieved record mass revenues. We increased our market share of revenue in our most important market. Our growth in Macau is coming from every gaming and non-gaming segment. Margins in every segment in Macau are stable or growing during the quarter, with the exception of our rolling premium direct business where our low hold negatively impact our EBITDA. The strong top line growth in our rolling business of 34.6 per cent over the quarter will positive contribute to our bottom line as hold normalised in that segment.

“It is clear, the Macao market’s evolving in Sheldon’s vision more than a decade ago to create the critical mass of our hotel, retail, entertainment and MICE offerings, positions us perfectly for future growth,” he added.

“We’re very bullish,” he said. “The bridge is a game changer. The opening of the Hong Kong-Zhuhai-Macao bridge is a major milestone that will help Macao grow towards the MICE business in the years ahead. It is an engineering feat of unprecedented scale and creates a direct connection between the Hong Kong airport, one of the largest and most important transportation hubs in all of Asia in Macau. It’s a magnificent achievement that accesses all China. The penetration of mainland China isn’t complete yet and the bridge opens up the whole of the Rim. I think we’re more confident of the sustainable growth of the premium mass, mass short term, but I wouldn’t rule out VIP. This has proven me very resilient over the years.”

“On top of LVS’s solid double-digit GGR growth, the retail mall operations are performing very well in spite of reports that luxury goods retailers are seeing softness in Asia,” he said. “Tenant sales per square foot at the Macau retail assets are up about five per cent over the past 12 months.”

He explained that the shift in focus to VIP by Las Vegas Sands accounted for some of the concerns over EBITDA margin.
Credit Suisse Analyst Cameron McKnight said the Macau results were ‘disappointing.’

He said: “The company attributed margin compression to low hold on higher margin direct VIP business. We don’t know if lower direct VIP hold was a result of the smoking ban and lower ‘time on device,’ which significantly impacts hold rates.”

In Singapore, Marina Bay Sands enjoyed a ‘very strong cash flow however VIP volumes and hold were lower this year.’ Adjusted Property EBITDA at Marina Bay Sands was $362m but it remains a frustrating market to grow.

“We still remain capacity constrained in Marina Bay Sands and hope that there is opportunity in the future to make additional investments in Singapore as it’s a very strong market,” Mr. Goldstein explained. “We’d want to see more entertainment in the region to drive more premium mass play. Our rolling business there has been limited for a number of years now.”