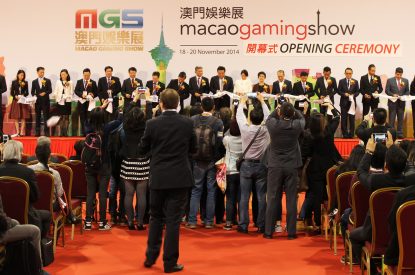 The 2nd edition of the Macao Gaming Show, (MGS) which attracted an international audience of C-Level gaming professionals to the Venetian Macao on November 18 to 20, has been declared a major success with all Key Performance Indicators (KPI) utilised by the organisers showing a positive year-on-year trend.

Jay Chun believes that the success of MGS has sent out a clear message to the international gaming community. He stated: “Gaming professionals from throughout the world as well as from the domestic industry here in Macao took the opportunity to visit our exhibitors, to network with industry colleagues, and to listen to the key note speakers we assembled as part of the co-located Macao Gaming Summit which debated key topics impacting gaming in Asia. The show floor went beyond just gaming. We have a broader exhibitor base showcasing top gaming and non-gaming products and services, even luxury cars, including one worth HKD30 million.”

“Our international guests who came to Macao have witnessed the tremendously exciting projects that are taking place here. They saw at first hand the economic development of the city which has been made possible through the support of the government. I am delighted that MGS has been able to play a part in assisting international gaming delegates to understand the dynamics of the city and the uniquely progressive vision of our government.”

He continued: “Our survey showed that over 96 per cent of attendees are likely to return to MGS in 2015 and that 94 per cent would recommend MGS to work colleagues or industry peers. Based on these findings and other show statistics, it is clear that MGS has built on the momentum generated following its launch in 2013 when many similar events struggle in their second year. We are now busy preparing for year three and putting an ambitious but deliverable strategy in place to take Asia’s number 1 gaming exhibition to the next level.”

The future of gaming in Asia was debated at the conference running alongside the exhbition, when a total of 34 gaming industry thought leaders provided a unique insight to many of the industry’s most important trends. The three day programme focused on key gaming topics and how they impact both established and emerging gaming jurisdictions including Japan, Laos, Cambodia, Vietnam, Korea, Sri Lanka as well as Macao.

Bloomberg Intelligence’s Margaret Huang opened the Summit with a keynote speech that laid out the company’s detailed analysis of Macao’s gaming market. Her presentation revealed the figures behind the recent changes in revenue, highlighting a changing landscape with a bright future. Her presentation confirmed that the shift away from VIP revenue remains the primary reason for adjusting growth in Macao, but highlighted deeper analysis which reveals that the current movement was caused in part by a big push for mass market visitors on the part of most of the major casinos.

Mr. Huang projects that although this new strategic direction may result in continued cooling through early 2016, the future remains positive for Macao. An uptake in available rooms by around 40 per cent, along with an increasing amount of casino floor space dedicated to popular mass market games, leads Bloomberg to project strong growth to return before the end of 2018.

Dr Kazuaki Sasaki, Dr Day-Yang Liu, and Eugene Christiansen spoke on a panel moderated by Asian market expert, Mikio Tanji of Gaming Capital Management, to give their insight into the future of large-scale casinos in Japan and Taiwan, and how the opening of these markets would impact Macao.

Nihon University Professor Sasaki discussed the gambling landscape in Japan, currently dominated by pachinko, and how this would evolve with addition of casinos. Lamenting the slow progress towards casino laws on the part of the Japanese government, he characterised the process as, “three steps forward and two steps back,” but was buoyant on the future of integrated resorts in Japan.

Dr Liu, director at the Center for the Study of Lottery and Commercial Gaming at the National Taiwan University of Science and Technology, revealed that progress towards casinos in Taiwan’s outer islands was altogether more concrete, with an optimistic assessment that a casino law will be passed in the first half of 2015. He also confirmed suspicions that Taiwan would be competing for visitors with existing markets in Singapore, Philippines, Malaysia, and Macao.

Taking up this theme, Christiansen, founder and chairman of Christian Capital Advisors, looked at how the emergence of casinos in Taiwan and Japan would impact Macao. He suggested that the era of companies with large debts and low equity was over, with new financial models required for operators to prosper. He also touched on the difference in gaming predilections among the region’s visitors – noting that while baccarat is king in Macao, roulette is the game of choice for Japanese players.