Cyprus – Melco confirms City of Dreams Mediterranean will open in 2021 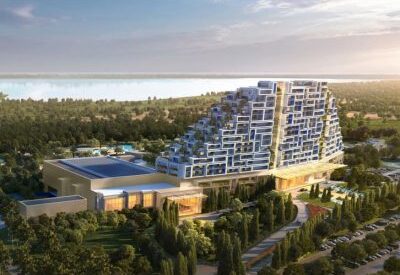 Melco International has confirmed that the Cyprus Integrated Resort, destined to be the largest in Europe, will be called City of Dreams Mediterranean, utilising the branding that has proved so popular in Macau and the Philippines.

The news was confirmed by the Integrated Casino Resorts Cyprus Consortium, comprising Melco International and The Cyprus Phassouri at an event organised by the Energy, Commerce, Industry and Tourism Minister Mr Yiorgos Lakkotrypis at the Presidential Palace.

The Integrated Resort is the biggest tourism development in Cyprus with a total investment of €550m.

Lawrence Ho, Chairman and Chief Executive Officer of Melco, said: “I am proud that the Cypriot government has entrusted Melco and CNS to build Cyprus’s first Integrated Resort which will place Cyprus on the world tourism map and attract visitors, not just from the surrounding region but also from the whole of Europe and around the world. In the same way as we delivered in Macau and the Philippines, we build with local partners, invest in extraordinary world-first architecture and design, create sophisticated entertainment experiences, and embed state-of-theart technology into everything we do.”

City of Dreams Mediterranean will be developed in western Limassol, and is expected to be launched by early 2021. The Integrated Resort is designed in the Mediterranean style, and will be built according to the principles of sustainable development and be tailored to fit Cyprus’s natural environment and landscape. It will be Europe’s biggest Integrated Casino Resort, with gaming areas of a total of 136 tables and 1,200 gaming machines, a five-star hotel with luxurious villas and 500 hotel rooms, 11 restaurants and cafeterias, a wellness centre, a sports centre, an extensive pool area with river woods and surf pools, a high-end retail area and an outdoor amphitheatre with extensive green areas. Also, in order to attract conference tourism, City of Dreams Mediterranean will offer 9,600-sq. metres of MICE facilities with a convention expo centre.

The pioneering project, a landmark for Cyprus and the wider region, is expected to attract an additional 300,000 tourists a year and will promote Cyprus internationally as a conference destination. The financial impact of the project on the Cyprus economy is expected to be approximately €700 million a year, which is around 4% of the country’s annual GDP, after the second year of the Integrated Resort’s operation. It will also offer around 4,000 local job opportunities during the construction phase and around 2,500 permanent jobs once it is fully operational.

The President of the Republic of Cyprus, Nicos Anastasiades, congratulated the Consortium and expressed his appreciation for its decision to commit this mega project. “I can assure you that we consider Melco Group as an important contributor to our economy and as a real partner of the Republic of Cyprus in further enhancing and enriching our tourist product for the benefit of the country and its people.”

A temporary casino will operate in Limassol until the official launch of City of Dreams Mediterranean. Four satellite casinos will also become operational in 2018 in Nicosia, Larnaca, free Famagusta and Paphos.