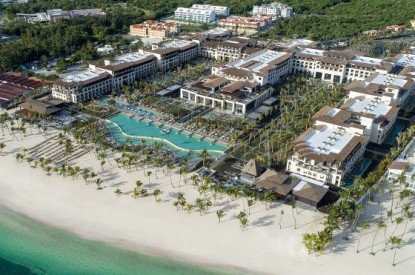 The US$257m Hotel Lopesan Costa Bávaro Resort, Spa & Casino has opened its casino and 1,048 hotel rooms in Punta Cana in the east of the Dominican Republic.

As well as the 12,120 sq ft casino, the venue also boasts an impressive amphitheatre, which can hold up to 790 people, a nightclub, a bowling alley and an amusement arcade. It has six pools, six thematic restaurants, two buffet restaurants, two beach clubs or beach clubs and four bars swimming pool

Mr. García said: “The hotel industry of the country has decided to embark on a race for quality. This project is a true reference of the hotel industry anywhere in the world. If we have been successful, that means that the Dominican Republic has earned a prestige and that prestige means that we have a great reputation as a destination.”

Francisco López, CEO of the resort’s owner Lopesan Group, said that the project gave jobs to ‘about 1,200 new employees from almost all provinces, not counting the increase in demand for local suppliers.’

Carlos Jiménez Ruíz, General Director Grupo Lopesan in the Dominican Republic, said: “The hotel has 1,048 rooms already operational in this first stage, as well as reception, common areas, swimming pool, gourmet restaurants, bars and we premiere this weekend our magnificent theater where we will be providing our famous shows and shows.”

The project’s second phase is scheduled to be inaugurated in 2021 with an investment of $224m and will complete the 2,500 rooms.