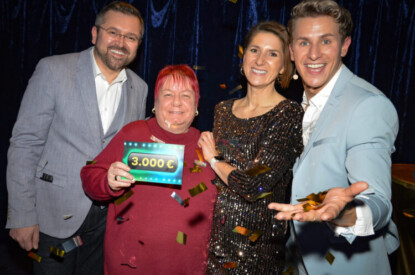 It was an evening of superlatives at the Merkur Spielbank Leuna with hundreds of enthusiastic guests, attending a live show that it said ‘could hardly be surpassed in terms of excitement and lots of cash,’ which was distributed around the clock in the audience and on stage.

The kick-off event of the Big Casino Gameshow November 26, could hardly have been more successful for Merkur Spielbank Leuna – and for the proud winner of the €3,000main prize. Its success promises great things for the future with the next game shows already being planned for the coming year at the Merkur casinos in Saxony-Anhalt.

Olcay Kaçak, Director of Merkur Casinos in Saxony-Anhalt, said: “Within a very short time, the premises of the casino filled up, as one was normally only used to on New Year’s Eve. We welcomed almost 500 guests to the ‘Big Casino Gameshow’ on Saturday. We have thus broken the visitor record in the Merkur Casino in Leuna for this year. To reach such a high number of visitors directly with the first game show in our house is an incredible success for us.”

The enthusiastic faces of the casino guests showed that a visit to the Merkur casino in Leuna last Saturday was worthwhile – and for good reason, because in addition to an exuberant atmosphere, the moderator team spread cash totaling €6,000 in the audience. Whoever was the first to cheer as soon as presenter Lukas Sauer mentioned the main prize of €3,000 received €50 in cash. Whoever answered questions from the moderator team the fastest and loudest also received €50. And those who made it onto the stage as a candidate could even go one better: Show master Lukas Sauer and his assistant Steffi presented the game show candidates with boxes, envelopes and other utensils, behind which cash prizes, semi-final tickets but also rivets were hidden. Those who knew how to correctly assess the seductive but cautious offers of the moderator duo and could keep the rivets away from themselves could look forward to rich cash winnings or a ticket for the wheel of fortune semi-finals.

For the candidates who showed a lot of tact on the wheel of fortune, the heartbeat finale saw three candidates, ten boxes and only one main prize. One by one, the game show finalists opened their chosen boxes until only two boxes remained at the end. Tension and thrills could be felt throughout the casino. And finally the time had come: Both finalists opened their last box. Winner Claudia Linek said: “I came from Thuringia especially for the game show. The fact that I can now actually take home the main prize is an indescribable feeling.”

After the great success of the Big Casino Gameshow in the Merkur Spielbank Leuna, the plans for further shows are already in the starting blocks:

“The game show has been incredibly well received by our guests. For this reason, we are already planning several repetitions for 2023 – not only in Leuna, but also in our houses in Magdeburg and Halle (Saale),” says Olcay Kaçak. “But that’s not it: live shows are very popular in all our casino. That’s why, in addition to the Big Casino Gameshow, we will also be bringing other game concepts to the stage next year.”